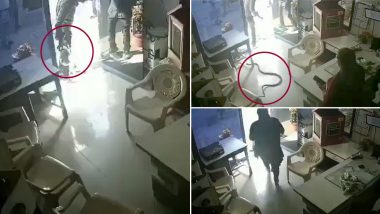 In a shocking incident, video of a man purposely leaving a live snake inside an office room has gone viral. The clip shows a woman standing as the man leaves the snake inside the cabin. The woman can be thereafter seen quickly walking out of the room. The incident happened on Monday at Chaudhary petrol pump situated at Mumbai's Malkapur Road. The incident which was captured on CCTV camera is now being widely shared on social media platforms. It seems that the man who was a snake catcher left the snake inside the petrol pump owner's cabin as he was denied petrol in a can. Snakes Come Out in The Rains: Here's What You Should Do If You Spot Serpents in Your Area This Monsoon.

Apparently, he asked the staff at the petrol pump for fuel in a can which they denied. Seems that the man was angered by the incident and came with a snake inside a jar. The video shows him opening the bottle and jerking it to push the snake out of it. The reptile crawls to one side of the room and the man walks away quickly thereafter. Ssscary Ride! Cobra Found Hissing Inside Handle of Scooty, Watch The Snake Rescue Video That Will Make Your Skin Crawl.

A snake charmer had to be summoned to rescue the snake left in the cabin. Police are investigating the incident to find out the man's identity. According to the latest reports, he is currently absconding. Petrol pumps generally refuse to give petrol in bottles for various reasons. It is said that plastic dissolves in petrol and hence, petrol pump owners do not take the risk. The Cyberabad Police had put restrictions on the loose sale of petrol after a few accidents involving petrol.

(The above story first appeared on LatestLY on Jul 14, 2020 03:26 PM IST. For more news and updates on politics, world, sports, entertainment and lifestyle, log on to our website latestly.com).