The 144th edition of this competition which took place in New York had over 2,500 canine participants. A beautiful black poodle named Siba exuded confidence and her elegance won her the title. Siba was chosen from the top seven finalists. 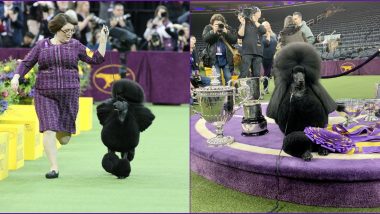 The Westminister Kennel Club Dog Show came to an end with Siba, the standard poodle winning the title of Best in Show. The 144th edition of this competition which took place in New York had over 2,500 canine participants. A beautiful black poodle named Siba exuded confidence and her elegance won her the title. Siba was chosen from the top seven finalists. This happens to be the fifth time since the show in 1991, that the breed of standard poodle has won the Best in Show. However, not everyone's happy with the results as they pitted for Daniel, the Golden Retriever to take the title. National Dog Show 2019: Thor the Bulldog Wins The 'Best in Show' Title (Watch Video).

Bourbon the whippet came second winning the Reserve Best in Show. Other finalists among the top seven were Bono the Havanese, Wilma the boxer, Conrad the Shetland sheepdog, Wilma the boxer and Vinny the wire fox terrier. While the crowd's choice was for Daniel, the golden retriever, Judge Bob Slay was impressed by Siba's confidence. Talking about it, her handler Chrystal Clas told in Washington Post, "She just has this confidence in herself, this attitude. She keeps me on her toes. She’s so elegant and full of herself and funny." The judges seemed to agree. This was Siba's final show and she has retired as a champion. Pictures and videos of Siba were shared online.

Check Siba, The Standard Poodle Who Won Best in Show:

The 144th #WKCDogShow Best in Show winner is Siba the Standard Poodle! pic.twitter.com/0xWLI5AA9B

Siba With Her Big Win

Also, Siba has won the title, it seems like Daniel the golden retriever has won more hearts. A lot of people wanted Daniel to win and similar reactions have been shared on social media. Check some tweets about Daniel.

The judge when looking at Daniel. #WestminsterDogShow pic.twitter.com/ljBMz331FD

How Can Daniel Not Win?

Me when I found out Daniel didn't win #WKCDogShow pic.twitter.com/0wxHmI2UWp

I need it explained to me as if I am a 5 year old how this is not the best in show?! #danielwasROBBED pic.twitter.com/GC2L7mwmEc

okay maybe this pup should have won https://t.co/axqGKvunMI

Clearly Daniel was more loved but Siba graced over. The breed of Golden Retriever has surprisingly never won the best in the show here. Which is probably why everyone wanted Daniel to break the record.

(The above story first appeared on LatestLY on Feb 12, 2020 11:31 AM IST. For more news and updates on politics, world, sports, entertainment and lifestyle, log on to our website latestly.com).