The annual National Dog Show 2019 saw a bunch of amazing dogs, but a bulldog captured the hearts. Thor, an adorable pup won the prestigious title leaving behind fellow competitors. 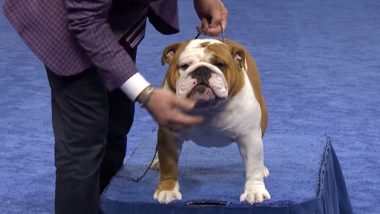 The annual National Dog Show 2019 saw a bunch of amazing dogs, but a bulldog captured the hearts. Thor, an adorable pup won the prestigious title leaving behind fellow competitors. Thor whose registered show name is GCHG Diamond Gold Majesu Pisko Bulls earned the spot leaving behind 2,000 canines rom over 193 breeds in the country. Earlier in the competition, the bulldog won in the non-sporting group against 19 other breeds including Chinese Shar-Pei and Shiba Inu. He also beat six other group winners to claim the coveted title of Best in the Show. Instagram Star Pet, Oliver the Dog Is so Cute That He Is Always Mistaken for a Fluffy Teddy Bear! These Paw-dorable Pictures Are a Proof.

Other dogs in the 2019 National Dog Show include Havanese from the Toy Group, Golden Retriever from the Sporting Group, Old English Sheepdog from the Herding Group, the Siberian Husky from the Working Group, the Soft Coated Wheaten Terrier from the Terrier Group and the Pharaoh Hound. While Thor is definitely the champion, his handler Eduardo Paris captured the audience's attention as he fell to the ground when Thor was announced as the winner. Beaming with happiness he gave Thor a big hug. After the show, Eduardo in an interview said, "I love this dog. He's a very complete dog... he moves like a dream."

Last year, a three-year-old whippet named 'Whiskey' had won the competition. This year, Azawakh, a new breed was introduced into the competition. The National Dog Show is held in the United States since 1993. The show is sanctioned by The American Kennel Club that helps raise money for various canine-related causes. The National Dog Show was hosted by award-winning TV personality, author and Broadway star John O'Hurley, and expert analyst and American Kennel Club-licensed judge David Frei, who has officiated at dog shows worldwide.

(The above story first appeared on LatestLY on Nov 29, 2019 12:30 PM IST. For more news and updates on politics, world, sports, entertainment and lifestyle, log on to our website latestly.com).