That’s How You Should ABC! 6-YO Robert Samuel White Raps ‘You Can Be ABCs’ of Careers With His Father & People Are Loving It (Watch Video)

From architect to a gastroenterologist to the intelligence officer, Sam sings about what each occupation entails for all the alphabets. This is what the ABCs parents should be teaching their children so that they know their interest, and grow up just as confident as Samuel is on the camera. 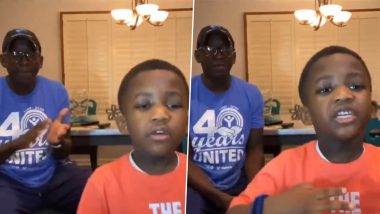 Enough of ‘A for Apple,’ it is time that we teach our kids that it is also ‘A for Architect’ and they can create a building that ‘touch the sky!’ You may not have thought about how each alphabet could stand for so many inspiring career choices, this 6-year-old kid from the US state Tennessee did, and he redefined the ABCs. In a video, Robert Samuel White raps with his father “You Can be ABCs” of careers and it is so inspiring that we wish we knew it when we were kids. From architect to a gastroenterologist to the intelligence officer, Sam sings about what each occupation entails for all the alphabets. This is what the ABCs parents should be teaching their children so that they know their interest, and grow up just as confident as Samuel is on the camera. US Toddler Leading His Preschool Classmates in Prayer Before Meal Will Warm Your Heart.

Samuel is a first-grader, and he created the song with his father to come across in so many career choices in a fun way. But the song is just so inspiring that people cannot stop watching the video, again and again. The song was recorded with a teleprompter, using only Sam’s mad skills and his memory. Using all the 26 letters in the alphabet, Sam came up with the creative careers and put together a song to inspire everyone. “Ready? Let’s go! You can be an A, you can be an architect creating buildings that touch the sky,” Sam White can be heard saying in the video.

The song has gone crazy viral. This should be the ABCs that kids should know—how each alphabet can be so inspiring with these many career choices that not many of us ever knew. If you are wondering what Y and Z stand for, well its “Your Own Boss” and for Z “Just don’t be a Zombie and let the world pass you by!”

They penned this as the #YouCanBeABCs with Sam.

This is the ABC's we should be teaching our youth.#keepdreaming #kids #education #success #goals #tuesdaythoughts #tuesdaymotivation pic.twitter.com/NrnBWchWMk

Jut to be a little more specific; Sam does not want to be a musician. “I want to be an architect, a governor, or a president,” he was quoted saying in media reports, after the video surfaced online. Sam started reading since he was two years old, his mother noted, and she added that they would make a game out of the stories he would read, putting his sight words up and around the kitchen island and going through them every day. Knowledge is fun, and both Sam and his father just proved how it could be done.

(The above story first appeared on LatestLY on Oct 30, 2020 01:25 PM IST. For more news and updates on politics, world, sports, entertainment and lifestyle, log on to our website latestly.com).