Two women at a Walmart in North Carolina were captured intensely fighting over PS5 after being told it was sold out. The women were captured exchanging punches over the gold-dust item, ending with one of them getting stomped in the face. 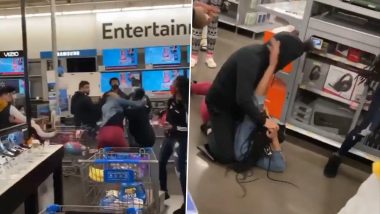 There is a growing craze over PlayStation across the world. The latest series was released during the holiday season, and we have seen videos and pictures of gamers waiting overnight outside stores to get their hands. With such popularity, it is easier for the stocks to get over. Walmart PS5 restock events have been reportedly increasing in frequency. The retailer earlier noted that the console is selling out within seconds of restocks. Amid the increasing demand, two women at a Walmart in North Carolina were captured intensely fighting over PS5 after being told it was sold out. The women were captured exchanging punches over the gold-dust item, ending with one of them getting stomped in the face. Instead of stopping the violence, bystanders rushed to click selfies and videos.

PS5 and Xbox series was recently released, and gamers across the world are trying to get their hands at the latest collection. With stocks getting over sooner, retailers are witnessing significant crowd. Video footage posted by Twitter user @_justkeith showed two North Carolina women doing their holiday shopping at Walmart. The beginning of the clip shows a woman with long braids shouting at another one, “What the f**k are you gonna do?” She removes her jacket and face mask as she continues to exchange heated words with the other customer.

At one point, a man and a woman can be seen attempting to deescalate the situation, but the women continue to shout at each other, while other customers wait in a queue with their shopping trolleys. It was the woman in the black hoodie who begins to attack the other woman. The pair fistfight across the electronic section of the store, until the woman in braids, is knocked out after she was stomped in the face. Bystanders were also captured taking videos and selfies while the fight between the women continued.

According to reports, both the women left the store before cops arrived, without a PS5. This is not the first time such an incident occurred. In the past years too, we have seen gamers and shoppers fighting over a particular at stores, getting into heated arguments and punches.

(The above story first appeared on LatestLY on Dec 20, 2020 12:57 PM IST. For more news and updates on politics, world, sports, entertainment and lifestyle, log on to our website latestly.com).