A tweet of an illustration which shows the different ways one might imagine an apple with their eyes closed has opened up a wide conversation among Twitterati about how imagination on the whole works! 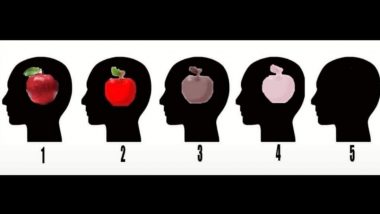 Imagination is such an interesting concept, wherein a mind makes situations, forms imagery or concepts, fuels a creative vision of what something/someone would look like. But the power of visualisation differs so much among us humans, was brought to notice by a tweet on how one visualises an apple! A tweet of an illustration which shows the different ways one might imagine an apple with their eyes closed has opened up a wide conversation among Twitterati about how imagination on the whole works! With over 10,000 replies on how one visualises an apple in their mind, the tweet has sparked an interesting discussion on how different people see (visualise) differently of a very common object. Girl's Terrifying Description of Her Imaginary Friend (Ghost?) Makes Other Share The Creepiest Things Kids Say.

Twitter user Mary who goes by the handle @premium__heart posted an illustration with 5 options each showing head with apple imagery. The first one is a bright red apple with a leaf, following three images have the colour fading, and the last one is a blank head, with no imagery. She tweeted that "I'm a 5". Gradually users started commenting on their imagination and some people confused about how others can see images in their head. The tweet has got over 8,000 retweets and close to 48,000 likes.

This is still blowing my mind lol

Close your eyes and imagine an apple. What do you see?

Someone Sees a Green Apple

How Do You Do That?

Someone Can See The Whole Illustration

I wish I saw the question before the picture, now I can only see this. I will never see anything else ever again. pic.twitter.com/f1t0gi89lh

How Do People See Things?

Wait, people can actually SEE things in their head??? Not just?? Imagining an idea???

This One Saw a Clear Apple!

1. what are the rest of you doing wtf

— i bless the rains down in castamere (@Chinchillazllla) February 8, 2020

Someone Saw the Word

When I try to picture an apple, I see the word "apple." Just the text.

Mary cleared in her following tweets that an inability to see/visualise images is called Aphantasia. By definition, it is a condition where one does not possess a functioning mind's eye and cannot voluntarily visualize imagery. Now that we know this, can you visualise images in your mind? Do try this out with your friends and family.

(The above story first appeared on LatestLY on Feb 09, 2020 02:56 PM IST. For more news and updates on politics, world, sports, entertainment and lifestyle, log on to our website latestly.com).