Zorawar Singh Creates New Guinness World Record With 147 Skips on Roller Skates in 30 Seconds, Watch Video of the 21-Year-Old Indian Whose Achievement Amid the Pandemic is Inspiring Fitness Enthusiasts 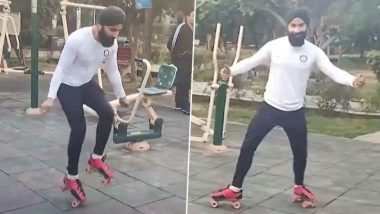 The global authority on record-breaking achievements, the Guinness World Records (GWR) has revealed a list of record-holding starts that help readers to discover the world around them. Despite being in a pandemic, people around the world are creating records with their mindblowing achievements. And the latest one in the list would be 21-year-old Zorawar Singh from India. A multiple Guinness World Records title holder, Singh had made it to GWR 2021 with his record for the most skips on the roller or inline skates in 30 seconds with 135 skips last year. Now, he broke his own record, with 147 skips on roller skates at the same time. The video of the man from Delhi doing his skips has gone viral on social media, inspiring fitness enthusiasts around the world. Wayanad's Giant Jackfruit Eyeing Entry into Guinness World Records.

According to the GWR’s official website, Singh was initially a discus thrower in high school. But he suffered a horrible injury which forced him to give it up. So, he took up skipping to regain his fitness. Singh went on to compete in the jump rope world championships. It was then when he decided to go and become a Guinness World Records title holder to be the best in his fields. So, now he did. After being trained for six days a week for up to four hours per day, the 21-year-old achieved the record. And he won’t stop here. As per GWR, Singh has plans to set more record titles and inspire many people in a similar interest to never give up. Richard Browning Makes Guinness World Record for Achieving the Fastest Speed in Body-Controlled Jet Engine Powered Suit.

Singh is an international jump rope competitor. Last year in December, when he made the record of most skips on rollerskates, Singh said that he was aspired to make a record of motivating his teammates and students and also enhancing the standard of jump rope sport in the world. With his latest achievement, the 21-year-old broke his own record and now is set to create more to continue inspiring people around the world.

(The above story first appeared on LatestLY on Sep 18, 2020 09:18 AM IST. For more news and updates on politics, world, sports, entertainment and lifestyle, log on to our website latestly.com).