Ashes 2019: James Anderson, Mitchell Starc and Other Bowlers to Watch Out For During England vs Australia Test Series 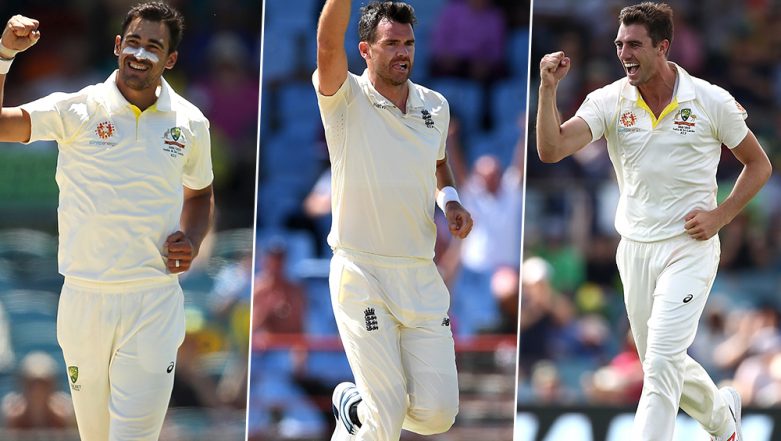 The Ashes 2019 is round the corner and the two giants of world cricket are all set to lock horns in test cricket’s biggest rivalry. After a successful World Cup campaign, hosts England will take on Australia in the five-match test series. The marquee event has always has been evidence of tight rivalry between both the teams where neither side is ready to throw the towel. The series will kick-start from August 1, 2019, and the quest for the urn will get underway. England vs Australia, Ashes 2019 Schedule With Match Time in IST For Free PDF Download: Full ENG vs AUS Test Series Time Table, Fixtures and Venue Details

The upcoming series will witness some of the best batsmen who are capable of piling up runs in any situation, which means the bowlers will certainly have a tough job at hand. However, the proficient fast bowlers in both the teams are capable of making the ball talk and can rattle any batting line-up in the world. Ahead of the five-match test series, here's a look at five bowlers who can top the bowling charts at Ashes. Ashes 2019: David Warner, Jonny Bairstow and Other Batsmen to Watch Out For During England vs Australia Test Series.

The latest prodigy of the England Cricket team didn’t take much longer to shine in the international arena. The Barbadian fast bowler played a crucial role in guiding England to their maiden ODI World Cup title, with 20 wickets, and is expected to do well in the longest format as well. The 24-year-old bowls with great pace and control, which means that scoring runs against him will not be easy at all.

The Australian fast bowler was utterly disappointed when he was left out of Australia’s World Cup squad and will want to give his best in the upcoming Ashes to prove his mettle again. The right-handed fast bowler has been a consistent performer in the longest format. Hazlewood is a great exploiter of the new ball and the swinging pitches in England are just tailor-made for him.

The number one ranked test bowler might well be the greatest threat for the English batting line up. The 26-year-old fast bowler regularly bowls at over 145 KMPH and is in sublime form at the moment. The bowler also played an instrumental part in guiding Australia to the semi-finals of the ICC Cricket World Cup 2019 and will be one to watch out for in Ashes 2019.

The highest-wicket taker of ICC Cricket World Cup 2019 will also want to replicate a similar performance in the whites as well. The left-arm pacer is a seasoned campaigner and has staggering numbers at the international level. Starc also played a crucial role in the last Ashes series, which was played down under and is expected to castle the English batting this time too.

The England fast bowler is ageing like fine wine and seems to get better with time. Anderson is the fourth-highest wicket-taker in test matches and will want to increase his tally in the upcoming series. The 36-year-old is a force to reckon with in test matches in England, which the Australian team will be wary of.

These were some bowlers who can pose a great threat to the batting line ups. England will go in the series with high confidence after the World Cup 2019 win, but the Australian squad is also one to watch out for. Thus, it is not easy to predict the favourites of the series and only time will tell as to who conquers the clash of the titans.