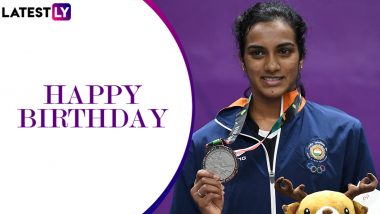 Olympic medallist and current badminton world champion, PV Sindhu celebrates her 25th birthday on July 5, 2020 (Sunday). Sindhu is the only the second Indian shuttler to win an Olympic medal and first-ever from the country to become the world champion. She beat Nozomi Okuhara to achieve the title in 2019 after two final heartbreaks. For her achievement in 2019, Sindhu was named BBC Sportswoman of the year and was also honoured with the Padma Bhushan award from the India government in January earlier this year. PV Sindhu at Fit India Talks: 'You Have to Enjoy Sports Instead of Thinking About Winning and Losing'.

Born to Volleyball playing parents, PV Ramana and P Vijaya, Sindhu reportedly started playing badminton since the age of eight. Her father was part of the Indian volleyball team that won the bronze medal at the 1986 Seoul Asian Games. He was bestowed with the Arjuna award in 2000 for his contribution to sports. Sindhu has certainly outlived her father’s achievements and is a role model to many young aspiring youngsters. As she turns 25, take a look at some lesser-known facts about PV Sindhu.

At 25, the young shuttler remains India’s biggest hope for an Olympic gold medal in Badminton. Sindhu’s form declined after her World Championship win but the former World No 2 has already qualified for the Olympics and will hope to be in great form when the Games approach next year.

(The above story first appeared on LatestLY on Jul 05, 2020 12:00 AM IST. For more news and updates on politics, world, sports, entertainment and lifestyle, log on to our website latestly.com).