Bray Wyatt turns 33 years old on May 23, 2020. Bray Wyatt is currently signed to WWE where he performs under SmackDown brand with the ring name 'The Fiend' Bray Wyatt. The real name of Bray Wyatt is Windham Lawrence Rotunda who is a third-generation professional wrestler. 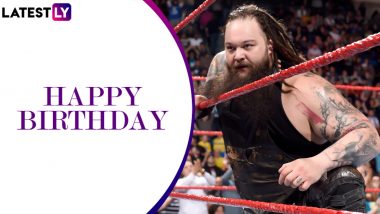 Bray Wyatt turns 33 years old on May 23, 2020. Bray Wyatt is currently signed to WWE where he performs under SmackDown brand with the ring name 'The Fiend' Bray Wyatt. The real name of Bray Wyatt is Windham Lawrence Rotunda who is a third-generation professional wrestler following in the footsteps of his grandfather Blackjack Mulligan, his father Mike Rotunda and two of his uncles, Barry and Kendall Windham. Not many are aware of the fact that Bray Wyatt has a real brother who is also signed to WWE. His brother name is Taylor Rotunda and he wrestles under the ring name of Bo Dallas. On the occasion of Bray Wyatt's birthday, we will take a look at the five best matches of the former WWE Universal Champion. WWE Raw May 18, 2020 Results and Highlights: Edge vs Randy Orton at Backlash Confirmed; Drew McIntyre Defeats King Baron Corbin (View Pics)

Bray Wyatt was born in the Tampa suburb of Brooksville, Florida, on May 23, 1987. He attended Hernando High School, where he won a state wrestling championship at 275 pounds in 2005. Bray Wyatt is a two-time world champion in WWE, having held the WWE Championship and Universal Championship once each. Bray Wyatt notably started off his career in WWE in the year 2010 where he was a member of famous faction 'The Nexus' and had the ring name of Husky Harris. In the year 2013, he caught good attention when he entered the main roster the villainous cult leader of The Wyatt Family. Under this gimmick, Wyatt won SmackDown Tag Team title once with Luke Harper and Randy Orton under Freebird rule. He has also held Raw Tag Team Championship belt along with Matt Hardy.

Bray Wyatt got into major limelight and is getting good push ever since he has revealed himself in the character of 'The Fiend' in the year 2019, just after completion of WrestleMania 35. In April 2019, Bray Wyat came up with a new gimmick of a children's entertainer, hosting a show called Firefly Fun House while simultaneously debuting a sinister alter ego known as 'The Fiend'. His first much under this gimmick was against Finn Balor at SummerSlam 2019. Now let us take a look at some of the best matches of Bray Wyatt in WWE. 'The Fiend' Bray Wyatt Shares Cute Pic of Son Knash With New WWE Universal Championship Belt, Says He Likes the Blue Title!

1. The Wyatt Family vs The Shield, Elimination Chamber, 2014

Wyatt and Jericho delivered fought their heart out in this cage match. The match was booked to make Bray Wyatt a star performer in one on one match.  Jericho turned back the clock with some spots off the cage that made him look like he was still in his prime. Bray Wyatt somehow managed victory by escaping the cage.

3. Bray Wyatt Vs John Cena Vs AJ Styles Vs Baron Corbin Vs Dean Ambrose Vs The Miz, Elimination Chamber, 2017

Fans were introduced to the character of 'The Fiend' for the first time in the ring for an actual match. Bray Wyatt was all over Finn Balor in this match with his spooky mask. Wyatt performance won over the audience with loud cheers and positive chants. His entrance gave goosebumps to not only the fans at the arena but also people watching at home.

The Fiend First entrance at SummerSlam 2019

'The Fiend' Bray Wyatt became Universal Champion for the first time in his career by defeating Seth Rollins in a falls count anywhere match at Riyadh in Saudi Arabia. We saw Bray Wyatt out of nowhere give mandible claws to Seth Rollins followed by a Sister Abigail move which helped him seal victory in that match.

Bray Wyatt was last seen in action against current WWE Universal Champion Braun Strowman at Money in the Bank, 2020 pay per view which took place at WWE Global headquarters. Wyatt unfortunately, wasn't able to win Universal Championship belt in that match as he lost to Strowman by pinfall. We wish Bray Wyatt a very Happy Birthday, may he keep entertaining us with more exciting matches in the years to come.

(The above story first appeared on LatestLY on May 23, 2020 10:00 AM IST. For more news and updates on politics, world, sports, entertainment and lifestyle, log on to our website latestly.com).