Calicut Heroes vs Black Hawks Hyderabad, Pro Volleyball League 2019 Live Streaming and Telecast Details: When and Where to Watch PVL Match Online on SonyLIV and TV? 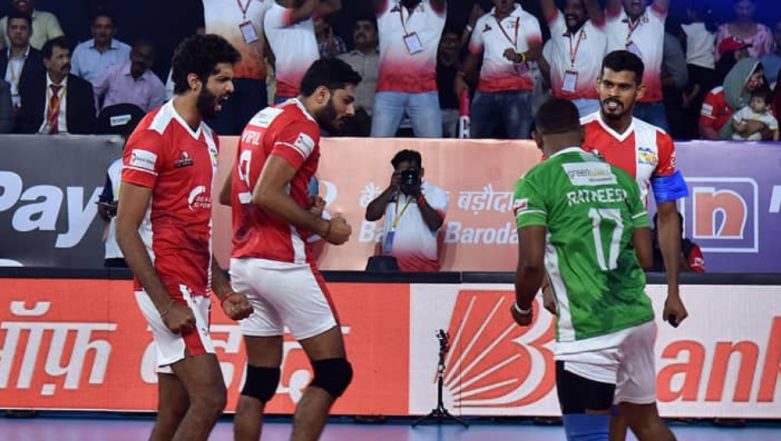 Calicut Heroes 5-0 dismantling of Kochi Blue Spikers was one of the standout performances of the 2019 Pro Volleyball League so far (Photo Credits: @ProVolleyballIN/Twitter)

Calicut Heroes 5-0 dismantling of Kochi Blue Spikers was one of the standout performances of the 2019 Pro Volleyball League so far. The win means they remain the only unbeaten side in the tournament so far but the Black Hawks Hyderabad would love to break their winning streak. Back to back losses in the league may have hampered their momentum but with games coming thick and fast there is hardly time to fret over losses. Pro Volleyball League 2019 Schedule With Match Timings.

Skipper Jerome Vinith was the star of the show as he guided his Calicut side to a win. His 16 points in the game which included 2 from serves capped off a brilliant day for him and his side. He can prove to be a nemesis for the Black Hawks if they allow him to settle into the contest. The likes of Paul Lotman and Ajith Lal also are in fine form and the duo will look to stamp their authority on their opponents as they did against Kochi. A win for Calicut tightens their hold on top of the league as they will move three clear of Kochi.

The Black Hawks Hyderabad have some quality players in Carson Clark and Ashwal Rai who have scored a lot of points. Luck has deserted the side on crucial junctures as despite playing well they have gone on to lose games. Rohit Kumar and Guramritpal Singh have not particularly sparkled and the duo is yet to have one decent game in the competition so far. Another defeat for the Black Hawks will really put them in a precarious position in terms of making it to the semis. Their competition has had fair share of surprises so far and if the Black Hawks Hyderabad come away with a win against Calicut Heroes, it will only add to that list. PV Sindhu Extends Support to the Pro Volleyball League.