Former South Africa great and Royal Challengers Bangalore Hall of Famer AB de Villiers has confirmed that he will be back with the franchise for next year's Indian Premier League edition. 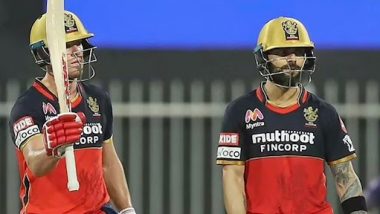 Mumbai, May 24 : Former South Africa great and Royal Challengers Bangalore Hall of Famer AB de Villiers has confirmed that he will be back with the franchise for next year's Indian Premier League edition. De Villiers, who quit all forms of cricket a few months back and did not participate in IPL 2022 in which RCB will play their Eliminator match on Wednesday, said he was not yet sure in what capacity he will return. "I will definitely be around the IPL next year. I would love to return to my second hometown," de Villiers told VUSport. LSG vs RCB, IPL 2022: Bangalore Pose Serious Threat to Top-Heavy Lucknow As They Sneak Into Playoffs.

"I will be around RCB next year, I am missing it, don't know in which capacity but I would like to visit my second home which is Chinnaswamy stadium -- I am looking forward to it," said de Villiers, who was included in RCB Hall of Fame a few days back along with West Indies' Chris Gayle. De Villiers, considered by many as one of the greatest white-ball cricketers with 9,577 runs in 228 One-day International matches, is the first South African batter to score a double century in Tests when he blasted 217 against India in April 2008. Supernovas vs Velocity, Women's T20 Challenge 2022 Live Cricket Streaming: Watch Free Telecast of Cricket Match on Star Sports and Disney+ Hotstar Online.

One of the most destructive batters in ODIs, de Villiers in January 2018 scored both the fastest fifty and the fastest century by a batsman, off 16 balls and 31 balls respectively. He joined the Royal Challengers Bangalore in the inaugural year in 2008 and is sixth on the list of players with the most runs scored in IPL with 5,162 runs from 170 innings at an average of 38.70 and a strike rate of 151.68.

(The above story first appeared on LatestLY on May 24, 2022 02:30 PM IST. For more news and updates on politics, world, sports, entertainment and lifestyle, log on to our website latestly.com).