Australia would want their opening combination of Aaron Finch and David Warner to fire against Sri Lanka, who have an inexperienced but exciting bowling attack. Finch's side would depend a lot on the performance of star all-rounder Glenn Maxwell. 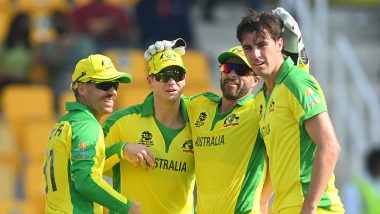 Australia face Sri Lanka in their second Group 1 game of the Super 12 stage at the T20 World Cup 2021 on Thursday, October 28. The match would be played at the Dubai International Stadium and would begin at 7:30 pm IST (Indian Standard Time). Both sides won their first matches--against South Africa and Bangladesh respectively and now they clash against other, aiming to get closer to a semifinal spot. For Australia, it was a complete team performance that saw them through against South Africa while Sri Lanka had to rely on individual performers to get over the line against Bangladesh. The inexperience of the Sri Lankans would definitely be put to test against Australia, who are a much stronger squad, on paper. David Warner Gears Up for AUS vs SL T20 World Cup 2021 Game, Posts Photo in Team Australia Jersey

However, despite having some big names, most of them have failed to fire, especially the likes of skipper Aaron Finch and his opening partner David Warner. The opening partnership between these two just have not clicked so far and while fans would hope that they return to form as soon as possible, it is a problem which needs immediate fixing. The performance of Glenn Maxwell would be very important and with a solid bowling attack led by the trio of Josh Hazlewood, Pat Cummins and Mitchell Starc, Australia have enough ammunition to trouble Sri Lanka. Let us take a look at the Dream11 Fantasy team tips for this match. Waqar Younis Apologises for Making Comment on Mohammad Rizwan Reading Namaz During IND vs PAK T20 World Cup 2021 Match (Check Post)

AUS vs SL Super 12 Match of ICC T20 World Cup 2021, Dream11 Prediction: Wicketkeeper – Kushal Perera (SL) can be picked as the wicket-keeper in your Dream11 AUS vs SL Fantasy Team.

AUS vs SL Super 12 Match of ICC T20 World Cup 2021, Dream11 Prediction: All-Rounders – Glenn Maxwell (AUS), Dasun Shanaka (SL) and Wanindu Hasaranga (SL) can be picked as the all-rounders in this side.

Josh Hazlewood (AUS) can be picked as captain of your AUS vs SL Dream11 team while Charith Asalanka (SL) can be named as vice-captain.

(The above story first appeared on LatestLY on Oct 27, 2021 12:27 PM IST. For more news and updates on politics, world, sports, entertainment and lifestyle, log on to our website latestly.com).