Australia vs England 5th Test 2021 Live Streaming Online of Ashes on SonyLIV and Sony SIX: Get Free Live Telecast of AUS vs ENG Pink-Ball Test on TV and Online

Both these sides would now take on each other in the last game of the series. Australia are expected to dominate and potentially clinch the victory but England would draw inspiration from their brave draw in Sydney to challenge the hosts. 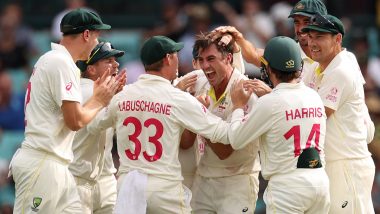 Australia and England are set to collide in the final match of the Ashes Test series in Hobart on Friday. The match would begin at 9:30 am IST (Indian Standard Time) and would be played at the Blundstone Arena in Hobart. England showed a lot of grit and determination to pull off a thrilling draw against the hosts in the last Test in Sydney and that might just give them some sort of inspiration going ahead into the last game. England have had a thoroughly disappointing series, losing 0-3 and getting beaten comprehensively by Australia on all those three occasions. Joe Root and his crew would aim at some sort of redemption to close out a disappointing time England had in Australia with a win. Mitchell Starc Opens Up on Return to IPL, Says It’s ’Certainly on the Table'

But Australia remain favourites for this pink-ball Test match, whatsoever. Usman Khawaja was a star performer for the hosts in Sydney, scoring two hundreds in the game on his comeback Test. He would open the innings alongside good friend David Warner with Marcus Harris being dropped. Travis Head would also come into the side. For England, Jos Buttler, who suffered a fracture to his finger, would be unavailable and is set to be replaced by Sam Billings. It would also be interesting to see serious the injuries to Ben Stokes and Jonny Bairstow are, as a late call on their place in the side is likely to be taken. Let us take a look at live streaming details of the game. David Warner Pens Heartwarming Note for Usman Khawaja After Latter Makes Successful Comeback in Australia vs England 4th Ashes Test 2021–22 (Check Post)

When is Australia vs England, 5th Test? Know Date, Time and Venue

Australia vs England Ashes 5th Test 2021-22 will be played at the Blundstone Arena in Hobart. The first day's play of the Day-Night Test will start on January 14, 2022 (Friday) and has a scheduled start time of 09:30 am IST (Indian Standard Time).

How To Get Free Online Live Streaming Of Australia vs England, 5th Test?

Fans can watch the live telecast of Australia vs England 5th Test 2021 on Sony Sports channels. Sony Pictures Network is the official broadcaster of Ashes 2021-22 and fans can watch the AUS vs ENG match live on Sony Six/HD in English commentary.

How To Get Free Online Live Streaming Of Australia vs England, 5th Test?

Since Sony Network holds the official broadcasting rights for Ashes 2021-22, Australia vs England 5th Test 2021 live streaming will be available on Sony Network’s OTT platform SonyLiv. Fans can live stream the game by either downloading the SonyLiv app or visiting the website and need to subscribe to enjoy the services.

(The above story first appeared on LatestLY on Jan 14, 2022 07:30 AM IST. For more news and updates on politics, world, sports, entertainment and lifestyle, log on to our website latestly.com).