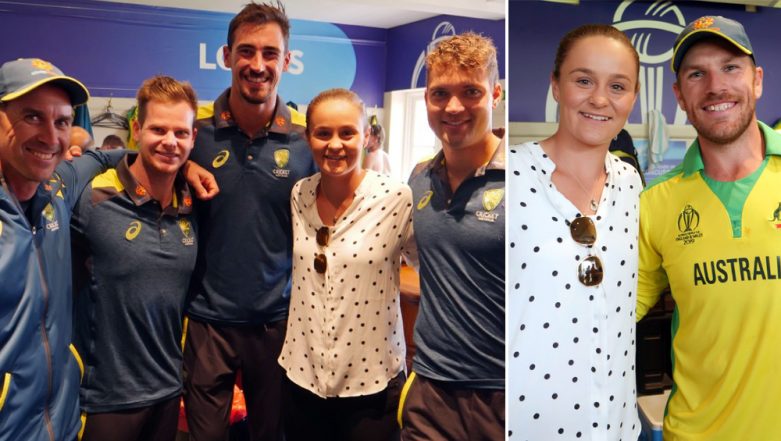 The Australian team were in the best of their forms on Tuesday as they defeated hosts England in the ongoing ICC Cricket World Cup 2019, leading their way to the top of the points table and into the semi-finals. It was a moment of joy for the former World Cup champions after their well-deserved victory and the men in yellow met a special guest, tennis champion Ashleigh Barty, after their triumph over England in the ENG vs AUS match at Lord's. Twitter Mocks England’s ICC ODI Number 1 Ranking After Losing to Australia in Cricket World Cup 2019 Match at Lord’s

After Australia knocked off the No.1 ODI team in the world, who better to help celebrate than the world's new No.1 female tennis player, @ashbar96!

In the photos, Ashleigh Barty, popularly known as Ash Barty, is seen with Steve Smith, Mitchell Johnson, Alex Carry and Australian Coach Justin Langer. The caption on the Cricket Australia photo read, “After Australia knocked off the No.1 ODI team in the world, who better to help celebrate than the world's new No.1 female tennis player, @ashbar96!” Mitchell Starc Says Can’t Afford to Breathe Easy After Australia Secure Semifinal Berth in CWC19

In another photo, Ash was seen posing with Aussie opener David Warner, who smashed 53 yesterday against England to give a solid start to Australian batting along with Aaron Finch, who scored a century.

The ICC Cricket World Cup 2019 match between Australia and England was expected to be a nail-biting clash but Australia pulled the match on their side comfortably after crushing England’s top order batsmen. The hosts were chasing a target of 286 but they lost quick wickets at the start, eventually losing the match by 64 runs.

Australia put up 285-7 with spectacular knocks by openers Aaron Finch (100) and David Warner (53). In response, England could only reach 221 after losing all of their wickets in 44.4 overs. Jason Behrendorff and Mitchell Starc with five and four wickets respectively stole the show and kept the English side away from victory.