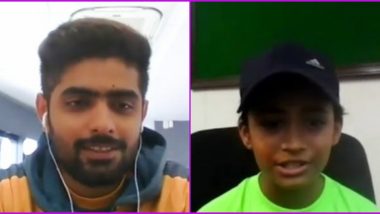 Pakistan Cricket Board (PCB) organised a special video call between limited-overs captain Babar Azam and his eight-year-old fan Samia Afsar. Babar is in England with the national team for the next month’s bilateral series. For the uninitiated, Samia’s video of her batting practice went viral on the social media earlier this year. Even former Sri Lankan captain Kumar Sangakkara showered praises on the talented girl. Pakistan vs England 2020: No 5-Star Accommodation for Visitors in Derby (View Photos).

As per PCB’s press release, Samia has made a sketch of Babar which she plans to gift the batsman once he returns from England tour. “I am Babar Azam’s biggest fan, and I want to be like him. Like a superhero he looks after our country and takes our team out of troubles. One day, I will also do for our women’s team what he does for the men’s. Babar bhai gave me some invaluable batting tips which I will practice whenever I can get back to nets,” Samia said.

Babar acknowledged the fact that fans motivate the team to do better. “Fans are the most integral part of the game and they keep us motivated through thick and thin. It gives us extra motivation to produce match winning performances when we know that such beautiful people are behind us and praying for our success,” the batsman said. England vs Pakistan 2020 Full Schedule Announced by ECB, Series to Start on August 5; Hosts to Take on Ireland in ODIs As Well.

“It was a great delight to meet Samia. She is a superstar. I was in awe when I first saw her batting video. The way she was timing the ball was remarkable. She has all the potential to be a great batter and I look forward to catching up with her when the Covid-19 situation improves.

Can’t get over how good this little player is. Much better technique than mine already. So encouraging to see such talent in cricket

“Being involved in sports from a young age helps in understanding life and disciplining yourself. At this stage, I want to ask all of my young fans to make sure they do some form of physical training while concentrating on their studies,” he added.

Pakistan will take on England in Three Tests and as many T20 Internationals. The tour will begin from August 05 with Tests followed by T20Is. Pakistan team is currently in Derby and are preparing for the bilateral series.

(The above story first appeared on LatestLY on Jul 15, 2020 03:14 PM IST. For more news and updates on politics, world, sports, entertainment and lifestyle, log on to our website latestly.com).