BCCI To Approach ECB for Practice Matches Ahead of England-India Tests: Report

India went into their World Test Championship final against New Zealand with having played just one intra-squad simulation match. This lack of match practice cost them dearly as they ended up losing the title. 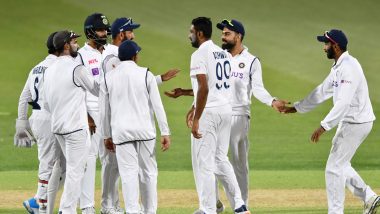 Jay Shah, the Board of Control for Cricket in India (BCCI) vice-president, would reportedly write to the England and Wales Cricket Board for organising two warm-up matches for the Indian side ahead of their five-match Test series against England. The Test series would start on August 4. India recently lost the World Test Championship final against New Zealand and much of it was attributed to a lack of proper match practice ahead of the marquee final. From now to the start of the England series, the Indian team would have a six-week gap and a couple of practice games could be accommodated easily within this space. According to reports, Shah has taken this collective decision after a discussion with the Indian team management. Virat Kohli & Co Could Play Intra-Squad Games Before IND vs ENG, 1st Test At Durham: Reports

"Jay (Shah) will be speaking to ECB and its Chief Executive Officer (CEO) Tom Harrison to make an arrangement for two warm-up games before the five Test match series," Arun Dhumal, BCCI treasurer reportedly said. "The secretary felt that the BCCI should request the ECB to give at least two warm-up games so that players can get in some good match practice before the series starts," he added.

Conducting warm-up matches in such a critical time with so many isolation protocols has indeed become a very difficult thing to do. Under normal circumstances, every team competes in atleast one practice match of three days to get prepared before heading into a series. In the past, lots of India A teams have toured England ahead of the senior side's Test series but this time, all the practice that Virat Kohli's team had was that of an intra-squad match. Well, that truly wasn't enough.

As a matter of fact, Kohli himself had voiced this concern of not being given first-class matches as a mode of preparation before the World Test championship final against New Zealand. He said, "That doesn't depend on us. We obviously wanted First-Class games which I believe has not been given to us. I don't know what the reasons for that are."

The Indian team members would be out of the bio-bubble and they would enter it back again on July 14. After a painful loss, they would be low on confidence heading into the England series.

(The above story first appeared on LatestLY on Jun 25, 2021 11:27 PM IST. For more news and updates on politics, world, sports, entertainment and lifestyle, log on to our website latestly.com).