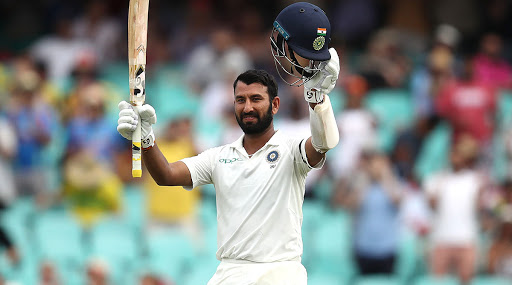 Cheteshwar Pujara has started off his New Year in spectacular fashion as the 31-year-old scored a century against Karnataka in Ranji Trophy 2019-20 clash. On January 11, 2020 (Saturday), Pujara scored his 50th first-class ton, thus joining an elite list of Indian players led by Sachin Tendulkar, Sunil Gavaskar and Rahul Dravid. At Stumps on Day 1, the Indian Test specialist is unbeaten on 162 and is joined by Sheldon Jackson on 99 as they stitched up a partnership of 163 runs. Saurashtra have dominated the proceedings and are 262/2 at the end of the first day's play. Virat Kohli Retains Top Spot; Ajinkya Rahane, Cheteshwar Pujara Slip in ICC Test Rankings 2020.

This century has put Pujara’s name in the history books as one of the finest players in Indian domestic circuit as the right-handed batsman became only the ninth Indian player to score 50 or more centuries in first-class cricket. The significance of this milestone can be judged by the fact that this puts the 31-year-old fourth on the list of active players with most first-class centuries, behind former England captain star Alastair Cook (65), South-African legend Hashim Amla (52) and India’s domestic giant Wasim Jaffer (57). Pujara is the youngest player in this list and among the current crop of Test players, only Australia’s Steve Smith can come close to his record, as he has 42 first-class centuries. Two 'Rare Catches' During Mumbai vs Karnataka Ranji Trophy Match at BKC in Mumbai! View Pic of Dismissed Rat Snake.

This is the fourth match that Pujara has played in this Ranji season as in the previous game the Indian international had registered two half-centuries against Uttar Pradesh and Railways respectively. The 31-year-old has always performed well against Karnataka scoring 945 runs in 13 innings against them with an average of 94.50. The Indian batting stalwart will be looking to reach the elusive 200-run mark on the second day of the match.