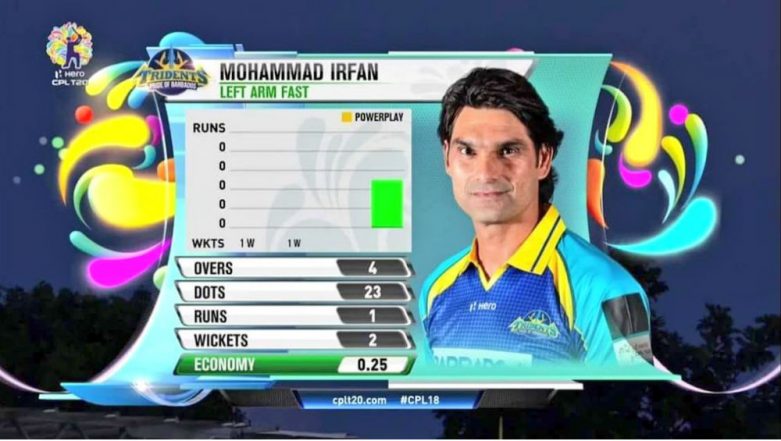 Mohammad Irfan playing in the Caribbean Premier League (CPL) 2018 produced the most economical spell in the history of T20. The Pakistan pacer, playing for Barbados Tridents, gave away just one run in his quota of four overs, besides picking two wickets. And what was the highlight about his spell was that the tall fast bowler bowled 23 dot balls out of 24. Apparently, his spell included three maidens. It surely will go down as one of the most impressive bowling spells in T20 cricket. CPL 2018 Points Table.

Despite, Irfan’s magical performance, Barbados Tridents lost the match against St Kitts and Nevis Patriots at Kensington Oval in Bridgetown. Barbados Tridents were defending a total of 147. Irfan in the very first over dismissed dangerous Chris Gayle for a duck. And then in his second over, he removed another opener Even Lewis to help his side get off to a perfect start. At the departure of Lewis, St Kitts and Nevis Patriots’ score read seven for two.  CPL 2018 Live Streaming and Telecast in India: Here’s How to Watch Caribbean Premier League T20 2018 Cricket Matches Online and on TV

However, other bowlers failed to compliment Iran as Brandon King and Devon Thomas added an 88-run stand for the third wicket to take the game away from Barbados Tridents. King went on to score 60 off 49 balls before being dismissed. Thomas was dismissed on an individual score of 32 before Ben Cutting and Tome Cooper finished the match for St Kitts and Nevis Patriots.

Truly honored & humbled to make the world record for the most economical four over bowling figures in the history of T20 cricket: 4-3-1-2. Thanks @CPL & @BIMTridents. Also I can't say it enough but Caribbean people are pure love. 🙌🙏🏽 #SayaCorporation @TalhaAisham pic.twitter.com/ot0zdEKMKC