West Indies took on Ireland in a T20I series which ended 1-1, as Paul Stirling scored a brilliant 95 off 47 deliveries to hand his side a crucial win in the first game. The 2nd game was washed out and the hosts levelled the series with a 9-wicket win in the final game. Here are the five best performances in cricket from the last week. 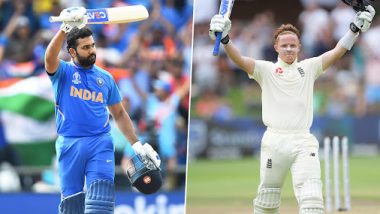 Another week of exhilarating cricketing actions comes to an end as India secure yet another series win at home. The Men in Blue faced Australia in a three-match ODI series and after losing the first game, rallied back to consecutive wins to clinch the series on Sunday. In other matches, South Africa are battling England in the 3rd Test match at St Geroge’s Oval Stadium and the English side look on a commanding position to take a 2-1 lead. Here are the five best performances in cricket from the last week. Mohammed Shami Scalps Four-Wicket Haul Against Australia in 3rd ODI, Equals Anil Kumble & Javagal Srinath's Record.

The ICC U19 Cricket World Cup got underway on January 17, 2020 (Friday) in a clash between hosts South Africa and Afghanistan and the Asian country recorded a commanding win. The Indian U19s started their campaign on Sunday with a 90 run win over neighbours Sri Lanka with young starts Yashasvi Jaiswal, Priyam Garg and Dhruv Jurel all scoring a half-century. West Indies took on Ireland in a T20I series which ended 1-1, as Paul Stirling scored a brilliant 95 off 47 deliveries to hand his side a crucial win in the first game. The 2nd game was washed out and the hosts levelled the series with a 9-wicket win in the final game. India Beats Australia by Seven Wickets to Clinch the Series, Twitterati Hail Rohit Sharma, Shreyas Iyer & Virat Kohli for their Stunning Performance.

The explosive Indian opener was at his best during the third ODI against Australia as he scored a brilliant century. The 32-year-olds century helped India to chase down a target of 287 runs set by the visitors in the series decider. With this innings, Sharma also became the third-fastest batsmen to reach 9000 runs in ODIs.

The 3rd Test between South Africa and England was a special one for Englishman Ollie Pope as the 22-year-old scored his maiden Test century. The young player stitched up a partnership of over 200 runs with Ben Stokes to give his side a commanding first innings score. Pope remained not-out as England declared on 499.

The left-handed Australian batsman was at his very best against India in the 1st ODI of the series. Warner along with Aaron Finch stitched up a partnership of 258 runs as the duo chased down the given target and handed India one of their worst defeats. The Australian was awarded as man of the match for his performance.

The 29-year-old was in great form as the Australian scalped five-wickets to help his side to a comfortable win. The Aussie’s brilliant performance wrapped up the Strikers for 110 in the first innings which was then easily chased down by the heat with seven wickets to spare.

England are in a commanding position in their match against South Africa and will be looking to wrap up the win on the final day. After the series win against Australia, Team India will now travel to New Zealand to play a five-match T201, three-match ODI and a two-match Test series.

(The above story first appeared on LatestLY on Jan 20, 2020 09:20 AM IST. For more news and updates on politics, world, sports, entertainment and lifestyle, log on to our website latestly.com).