IND vs ENG 5th Test: Ravi Shastri Says India Were Disappointing and Timid To Say the Least on Day 4

Former India head coach Ravi Shastri has called the country's batting in the second innings of the rescheduled fifth Test against England here on Monday as "disappointing" and "timid", adding that they should have batted two full sessions to give themselves a chance to win or at least draw the contest. 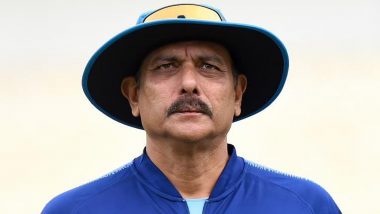 Edgbaston, July 5: Former India head coach Ravi Shastri has called the country's batting in the second innings of the rescheduled fifth Test against England here on Monday as "disappointing" and "timid", adding that they should have batted two full sessions to give themselves a chance to win or at least draw the contest. India are staring at defeat on the final day of the contest with England well-paced on 259/3 and requiring just 119 runs to win the contest and level the series 2-2. IND vs ENG 5th Test: Danish Kaneria, Former Pakistan Cricketer, Questions Ravichandran Ashwin’s Exclusion in Rescheduled Test.

Shastri, who was in charge when India took a 2-1 lead last year before Covid cases in the tourists' camp forced the fifth Test to be rescheduled, was critical of how the Jasprit Bumrah-led team batted on day four. "I think (it was) disappointing, to say the least, because they could have batted England out of this contest," said Shastri, who is part of the Sky Sports Cricket team at Edgbaston. "They needed to bat two sessions and I thought they were defensive, they were timid today, especially after lunch. "Even after they had lost those wickets, they could have taken some chances.

Runs were important at that stage of the game and I thought they just went into a shell, lost those wickets too quickly, and gave enough time for England to bat today." Former England captain Kevin Pietersen was disappointed at the tactics employed by India's stand-in captain Jasprit Bumrah. Pietersen felt Root and Bairstow were given overly defensive fields throughout their innings, which allowed them to rotate strike easily. "I don't think Bumrah got his tactics right at all, and I say that with the greatest deal of respect," Pietersen said. IND vs ENG 5th Test Day 4 Stat Highlights: England Close In on Victory.

"There is no way with a reverse swinging ball that he should make it that easy for the batter, because the batter is trying so hard to decipher which way that ball is swinging. When it's reverse swinging at 90mph, the nicest place to bat is at the non-strikers end, and the ability to get to the non-strikers end as easily as they did this afternoon, it's too easy," opined Pietersen. "They had long off and long on, and that was pure madness. For half an hour that was pure madness. Even for the last 15-20 minutes of the day's play, pull them right in, say 'Jonny, if you're good enough to hit me over the head, please do it.' "I hope they don't do it on Tuesday morning, but for England's sake, absolutely, let them spread them as far as they want," said Pietersen.

(The above story first appeared on LatestLY on Jul 05, 2022 01:07 PM IST. For more news and updates on politics, world, sports, entertainment and lifestyle, log on to our website latestly.com).