Chennai Super Kings and Kolkata Knight Riders are all set to take on each other in the IPL 2020 which is set to be hosted at the Dubai International Stadium in Dubai. In this article, we shall bring to you the live streaming details of the match but before that, let's have a look at the preview of the match. For the first time in the history of IPL, Chennai Super Kings have been ousted from the playoffs. 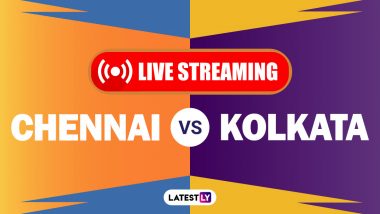 Eoin Morgan's men have won six games and lost an equal number of matches. The Yellow Army is placed on the last spot of the points table with eight points in their kitty. The team has so far won four games and lost eight matches. MS Dhoni and men from here on have nothing to lose and they would want to give their best. Now, let's have a look at the live streaming details.

Those unable to watch the CSK vs KKR match live on television can follow the game online. Disney+Hotstar will be live streaming the Chennai Super Kings vs Kolkata Knight Riders match online for its fans in India. Fans, however, need to subscribe to Hotstar by paying a nominal subscription fee. JIO and Airtel are also providing free Hotstar subscription on select plans.

(The above story first appeared on LatestLY on Oct 29, 2020 03:00 PM IST. For more news and updates on politics, world, sports, entertainment and lifestyle, log on to our website latestly.com).