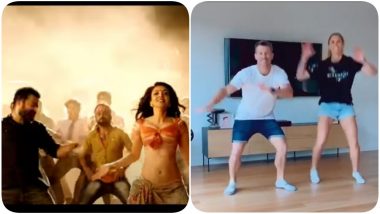 David Warner and his new liking towards TikTok has grabbed the headlines off late for his dancing videos. Very often is he seen dancing to popular Indian numbers along with his wife Candice Warner. He once again has put up a video to wish Telugu actor Jr NTR who celebrates his birthday today. The Australian cricketer took to social media and posted a video of himself dancing to the track ‘Pakka Local’ from 'Janatha Garage'. His wife Candice also was seen flaunting her zesty loves as they danced to the peppy number.  David Warner and Wife Candice Dance on Allu Arjun's Telugu Song 'Butta Bomma' (Watch Video)

David Warner also said that the dance was way too fast but they tried. Having said that the duo danced in perfect sync and once again impressed us with the same. In the caption of the video, the Australian even tagged the Telugu actor and wished him on his birthday. Even Sunrisers Hyderabad could not resist sharing the video and even tagged Jr NTR on the same. Check out the video below:

Happy birthday @jrntr have a great day. We tried but wow the dance is fast 😂😂 @candywarner1 #jrntr #birthday #fun #dance

Yesterday he put up w video where the entire Warner family was seen dancing to a popular Punjabi number named ‘Slowly slowly’. The best part of the video was the outfits they wore, which glowed in the dark. Check out the video below:

Yes we have lost it now 😂😂. Glow in the dark night. #family #fun #love #slowly @candywarner1

Prior to this, he was seen dancing to Allu Arjun’s popular number 'Butta Bomma'. The dancing skills of the family impressed the actor and he praised the family for the same on social media. Warner was more than thrilled to receive a reply from Allu.

(The above story first appeared on LatestLY on May 20, 2020 12:48 PM IST. For more news and updates on politics, world, sports, entertainment and lifestyle, log on to our website latestly.com).