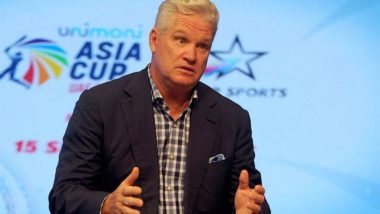 The news of Dean Jones sudden demise has left everyone shell shocked. He died of a cardiac arrest in Mumbai and the netizens still cannot fathom the fact that the former Australian great is no more. He was a part of the Star Sports commentary panel for the ongoing IPL 2020 and was put up in a seven-star hotel in Mumbai. Virender Sehwag, Virat Kohli, IPL franchises including Chennai Super Kings, Rajasthan Royals have mourned the sudden demise of the former Australian great. He was 59 and was one of the most favourite sporting analysts. His show, Prof Dean on NDTV was one of the most popular programs. Dean Jones Dies Due to Cardiac Arrest in Mumbai, Australian Cricketer-Turned-Commentator Was 59

In the program, he would come up with mathematical calculations where he would calculate the probability of the winning team. The biggest analysts swore by his analysis. Needless to say that he has left a void which is almost impossible to be filled. Now let’s have a look at a few Twitter reactions below.

Absolutely devastated to hear about the demise of Dean Jones. A colossal loss to the cricketing community. His connection to Chepauk will always be cherished. Deepest condolences to his family and friends. May his soul rest in peace. pic.twitter.com/mDHO0d76d0

Saddened to hear the news of Dean Jones passing away. Still cannot believe it. Was one of my favourite commentators, he was on air in many of my landmarks. Had really fond memories with him. Will miss him. pic.twitter.com/FZBTqIEGdx

Shocked to hear about the tragic loss of Dean Jones. Praying for strength and courage to his family and friends. 🙏🏻

RIP, Dean Jones. You will be missed.

We will miss you & your voice, Professor. 🙏

Dean Jones was a part of 52 Test matches scoring 3631 runs at an average of 46.55. The former Australian cricket also played 164 ODIs and scored 6068 runs. During his ODI career, Jones scored seven centuries and 46 fifties.

(The above story first appeared on LatestLY on Sep 24, 2020 04:41 PM IST. For more news and updates on politics, world, sports, entertainment and lifestyle, log on to our website latestly.com).