Did ICC Raise a Question Over Ambati Rayudu’s Exclusion From Team India 15-Man Squad for CWC 2019?

The BCCI yesterday announced the team for the ICC Cricket World Cup 2019, which is scheduled to be held in England. 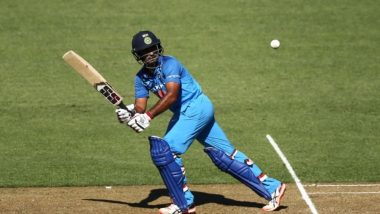 The BCCI yesterday announced the team for the ICC Cricket World Cup 2019, which is scheduled to be held in England. While players like KL Rahul, Hardik Pandya, Vijay Shankar and Dinesh Karthik made it to the cut, Rishabh Pant and Ambati Rayudu missed the bus for to England. The news sent a wave of shock amongst the fans especially because of the fact that Rayudu had been in a good form against West Indies. However, the Hyderabadi batsman was a little out of form during the series in New Zealand.ICC Cricket World Cup 2019 Schedule in PDF: Ticket Prices, Dates, Venue Details & Timetable Available for Download Online.

This cost Rayudu a spot in the World Cup 2019. Post his exclusion, the International Cricket Council out a tweet which looked as if they posed a question over BCCI’s decision. India Team for ICC Cricket World Cup 2019 Announcement Updates: Dinesh Karthik Included, No Place for Ambati Rayudu and Rishabh Pant.

Rayudu was excluded from India's @cricketworldcup squad. Do you think he should have made the cut?,” read the tweet by the ICC.

Rayudu was excluded from India's @cricketworldcup squad. Do you think he should have made the cut? pic.twitter.com/8Eu0ztKTH1

The point raised by the ICC went on to become a matter of debate for the netizens as they posted their opinion on the exclusion of the Hyderabadi batsmen.

(The above story first appeared on LatestLY on Apr 16, 2019 04:45 PM IST. For more news and updates on politics, world, sports, entertainment and lifestyle, log on to our website latestly.com).