Some of these innings bring back some great memories and can be replayed after the Diwali rituals are over at home. Here is wishing a very Happy Diwali to our readers. 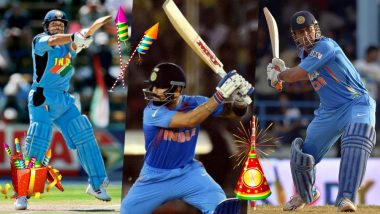 For all the cricket lovers out there, we have got a Diwali 2018 dhamaka for you, wherein all-time best Indian batsmen Sachin Tendulkar, Virender Sehwag, MS Dhoni, Virat Kohli and Rohit Sharma have something special for you guys! The festival of light-Diwali 2018 is upon here, and one of the best parts about it is the bursting of firecrackers. From kids to the grown-ups, firecrackers get people of all ages excited. But off late with the environmental groups campaigning extensively against the use of pyrotechnics people are caught between entertainment and being sensitive to nature. Now with court cases being filed to stop the use of high decibel firecrackers, things are taking a serious turn. Happy Diwali 2018 GIF Images for WhatsApp: Wish Shubh Deepavali With Animated Stickers; Short & Sweet Greetings Available for Free Download Online.

With pollution in our leading cities reaching an alarming level, we came up with an alternative to the bursting of crackers. Since cricket is a religion in our country and followed passionately in all parts, some of the top innings by our batsmen can work as illuminations. They may be low in the decibels count, but there would be no backing down in the entertainment quotient. Here are the top 5 innings. Shubh Diwali 2018 Greetings in Hindi: WhatsApp Messages, Stickers, GIF Images, SMS, Facebook Status to Send Deepavali Wishes Online.

India taking Pakistan at a World Cup is one game that can be considered as the mother of all battles. The two sides met at Centurion with Pakistan batting first and setting up a competitive total of 273-7 in its allocated fifty overs. Chasing 274 against a bowling line-up of Wasim Akram, Waqar Younis and Shoaib Akhtar needed someone to play a magical inning. Up stepped Sachin Tendulkar to play an unbelievable counter-attacking innings.

The little maestro scored 98 runs in 75 balls with 12 fours and a spectacular six off Shoaib Akhtar which became one of the moments of the World Cup. Who can forget the uppercut that deposited in the stands with a despairing Shoaib Akhtar perplexed with the pure brilliance of Sachin Tendulkar. India registered a comfortable six wickets win over the Men in Green to keep its upper hand in World Cup cricket against Pakistan.

Virat Kohli scored the fastest century in One Day Internationals by an Indian batsman when he battered the visiting Australian team at the SMS Stadium in Jaipur. Kohli, scored a 52 ball 100 that included eight fours band seven towering sixes. The hundred was even more special as India chased down 360 comfortably inside 44 overs with nine wickets remaining. Kohli set up an incredible partnership with fellow centurion Rohit Sharma to demolish the bowlers.

Before Kohli, the fastest centurion for India in ODI was Virender Sehwag who had scored a 60 ball 100 against New Zealand in 2009.

Hitman Rohit Sharma played the greatest individual innings in an ODI game against Sri Lanka at the Eden Gardens when he scored a mammoth 264 runs in 173 balls. This is the highest score by an individual player in the history of fifty over format and probably will stay for many years to come. The Mumbai batsman hit 33 fours and nine sixes in his 225 minutes stay at the pitch. What is incredible about the innings is that he had more runs than the opposition team in the game as Sri Lanka were bundled out for 251 in reply for India’s 404.

The quality of the Sri Lankan attack may have been poor, but the way Rohit Sharma went about hitting the bowlers was almost unbelievable at times. He also hit the highest the maximum number of boundaries during his memorable innings.

The innings that marked the arrival of MS Dhoni in international cricket has a special place in every cricket fans heart. Sent in at no 3 with India batting first against arch-rivals Pakistan, MS Dhoni seized the opportunity with both hands. Mahi hit a 123 ball 148 with 15 fours, and four sixes to absolutely decimate the opposition bowling. The footwork may have not been textbook, but the power in MSD’s shoulders was immaculate.

The Indian wicketkeeper was particularly aggressive with the spinners, and his trademark helicopter shot was also on display on occasion as he helped India put up 356-9. Pakistan in reply could only manage 298 as Mahendra Singh Dhoni won his first Man of the match award.

Batting great Virender Sehwag loved attacking bowlers from the onset and had several great innings under his belt. But his most memorable in ODI cricket came against West Indies during his last few years with the Indian team. Batting first in Indore with India playing his leadership, Viru tore apart the Caribbean bowling line-up. He smashed a mind-boggling 219 runs in just 149 balls that included 25 boundaries and seven sixes.

Sehwag may have got lucky a few times in his marathon innings, but for his fans, this was a treat like no other. His innings was also the highest ODI innings at that time as India put up 418/5.

Some of these innings bring back some great memories and can be replayed after the Diwali rituals are over at home. Here is wishing a very Happy Diwali to our readers.

(The above story first appeared on LatestLY on Nov 07, 2018 11:36 AM IST. For more news and updates on politics, world, sports, entertainment and lifestyle, log on to our website latestly.com).