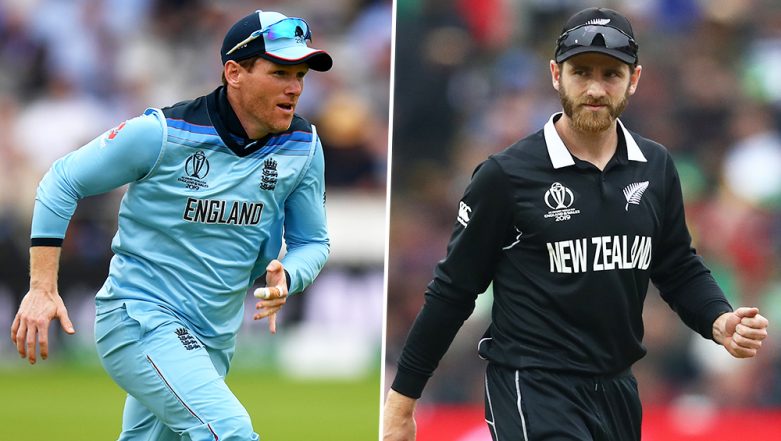 England and New Zealand will eye the semi-finals when they face each other in a virtual quarter-final clash of ICC Cricket World Cup 2019 at the Riverside Stadium in Durham. A victory will assure one of these sides a semi-final berth, but a defeat will still keep New Zealand alive in the race. But for England, a loss will mean, the hosts and pre-tournament favourites are out of the league stage. Meanwhile,  England skipper Eoin Morgan won the toss and elected to bat first.  England went in with the same team that beat India in their previous match, while New Zealand were forced into making a change. England vs New Zealand Cricket Score 41th ODI Match.

Lockie Ferguson injured his left hamstring during the final training session before the all-important clash which ruled him out of the ENG vs NZ game. Veteran Tim Southee has replaced him in the playing XI and will make his maiden ICC Cricket World Cup 2019 appearance.  England vs New Zealand Live Cricket Score of ICC World Cup 2019 Match.

New Zealand at one stage were among the hot-favourites to reach the final four stage after winning five consecutive matches on the trot before successive defeats to Pakistan and defending champions Australia put them in a must-win situation. The five consecutive wins have, however, helped their superior run-rate meaning a defeat at Chester Street will still keep them in contention for semi-finals.

But England has no such comfort. A defeat will eliminate them out of the CWC 2019, nulling all the efforts and change Morgan and his men had undergone to make a mark in this elite ICC tournament. They are in a do-or-die situation but the convincing 31-run victory over India will give them the much-needed confidence. The win also captivated their successive defeats to Sri Lanka and Australia.

It was a defeat in this same fixture four years ago that forced England to undergo an upheaval and change their crave methods in the limited format of the game. The revolution has seen a mighty change in the way they play and produce their game now. But fast four years and once again England are presented with a similar opportunity to show if things really did change at all. They are placed fourth in the points table with 10 points from eight games, New Zealand are a place above on third with 11 points.