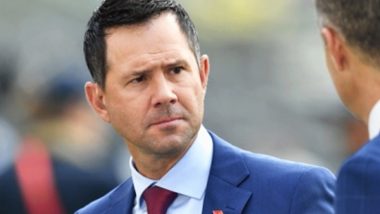 According to a report published by The Times, Ponting is 'high on Key's list of targets for Test coach' along with former India and South Africa coach Gary Kirsten. The report also states that Sri Lanka legend Mahela Jayawardene, who has extensive coaching experience on the franchise circuit with the likes of Mumbai Indians in the IPL and Southern Brave in The Hundred, is 'likely to be approached to coach the white-ball team', reports mirror.co.uk. Former England captain Nasser Hussain has previously called for Ponting to get the job. He told the Daily Mail, "For me, there is no finer brain in cricket at the moment than Ricky Ponting, who reads the game so well.  IPL 2022: Jos Buttler Joins Elite List of Batters With Two Tons in Same IPL.

"The new coach has to be someone the players' respect; the dressing room has been a bit too nice in recent years. And, my goodness, if the batters in that England team aren't going to listen to what Ponting has to say about technique, then why are they playing the game? "Not all greats of the game become good coaches because they're not sure how to get their message across. Ponting doesn't have that problem," Hussain had said. "But because I can't see him wanting to commit to a year-round gig -- if he wants to commit at all -- then we have to split the role. And there's no reason why Paul Collingwood can't be in charge of the white-ball team."

(The above story first appeared on LatestLY on Apr 19, 2022 10:49 AM IST. For more news and updates on politics, world, sports, entertainment and lifestyle, log on to our website latestly.com).