England batter Jos Buttler continued his rich vein of form in IPL 2022, hitting his second century of the tournament in a match against Kolkata Knight Riders at the Brabourne Stadium here on Monday. 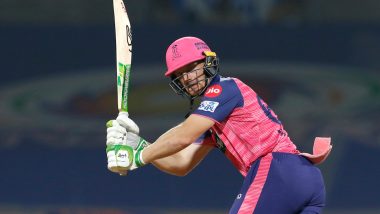 Mumbai, April 18 :  England batter Jos Buttler continued his rich vein of form in IPL 2022, hitting his second century of the tournament in a match against Kolkata Knight Riders at the Brabourne Stadium here on Monday. Buttler struck a 61-ball 103 on Monday, to add to his century against Mumbai Indians -- 100 off 68-balls -- earlier on April 7. RR vs KKR, IPL 2022: Wanted To Bowl Googly but Changed My Mind, Says Yuzvendra Chahal After Hat-Trick Helps Rajasthan Royals Beat Kolkata Knight Riders.

He has also scored two half-centuries during his six innings in the event and had scored 272 in five innings before this match. He joined the elite list of Virat Kohli, AB de Villiers, Hashim Amla, Shane Watson and Shikhar Dhawan who have scored two or more centuries in one IPL edition. Kohli holds the record of hitting four centuries during the 2010 edition.

Overall, this was Buttler's third hundred in IPL history and joined de Villiers in the list of overseas players with most centuries in IPL. While Buttler and AB de Villiers have scored three centuries, Aussies David Warner and Shane Watson have four apiece while flambouyant west Indies batter Chris Gayle, the self-proclaimed 'Universe Boss', leads the list of overseas batters with six centuries in IPL. The way Buttler is batting this season, he might join Warner and Watson soon and may even move closer to Gayle. Rajasthan Royals vs Kolkata Knight Riders IPL 2022: 3 Reasons Why KKR Lost.

Buttler is currently the leading run-getter in IPL 2022 so far, the current owner of the Orange Cap, with 375 runs in six matches at an average of 75 and a strike rate of over 156. He is the first player to have breached the 300-run mark this season. Lucknow Super Giants' K.L Rahul is the only other batter to score a hundred in IPL 2022 so far.

(The above story first appeared on LatestLY on Apr 19, 2022 10:34 AM IST. For more news and updates on politics, world, sports, entertainment and lifestyle, log on to our website latestly.com).