Brendon McCullum may have only been one of the commentators for the 2019 World Cup, but his impact on the final of the tournament is far greater than that. His effect on New Zealand is obvious as six players who played at Lord's on Sunday, including skipper Kane Williamson, were part of McCullum's side that made it to the final in 2015. 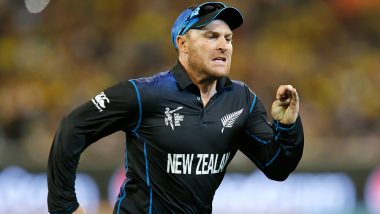 New Delhi, July 16: Brendon McCullum may have only been one of the commentators for the 2019 World Cup, but his impact on the final of the tournament is far greater than that. His effect on New Zealand is obvious as six players who played at Lord's on Sunday, including skipper Kane Williamson, were part of McCullum's side that made it to the final in 2015. But it is Eoin Morgan's admission before the start of the tournament in May that shows how much McCullum impacted England's rise in ODI cricket. CWC 2019 Final: A Look At Team England's Thrilling Journey in the ICC Cricket World Cup Tournament.

The England side going into the 2015 World Cup couldn't be more different from the one that played the 2019 edition. Alastair Cook had been removed as captain just two months before the tournament and Morgan had taken over. They had played 25 matches in 2014 and won just nine of them and just two in the tri-series they played against Australia and India just before the tournament. CWC 2019 Prize Money: Here’s How Much Winners England, Runners-Up New Zealand, Third-Placed India and Other Teams Earned in ICC Cricket World Cup.

They started the 2015 World Cup with a 111-run loss to Australia and followed that up with an eight-wicket loss to New Zealand. That second result may have only seemed like one of many bad results for them but in the context of what was to come later, the defeat to the Kiwis is a bit of a turning point.

England were all out for 123 and McCullum smoked 77 off 25 balls as New Zealand chased down the target in just 12 overs and two balls. "It was as close to rock bottom as I've been," Morgan reflected recently. "Certainly as a captain and as a player, being beaten off the park like that is humiliating," Morgan admitted recently.

"The way (McCullum's) New Zealand team played, the way they did it their own way was important. It's important for any team to get their own identity and stick with it," he said.  England looked a ponderous lot in that tournament, a far cry from the aggressive, all-guns-blazing approach they have taken in the years since.

While Morgan has been a big factor in England's transformation, he hasn't been the only one. The 32-year-old has said before that he wouldn't have been able to do it had it not been for the assistance provided by his former captain and the team's director of cricket Andrew Strauss.

"I was watching the last World Cup, working for Sky, and I was genuinely angry (about) what I'd seen," Strauss told ESPNCricinfo two days after England won the 2019 World Cup.

"Not because of anything those guys were doing, but the same mistakes made in the two previous World Cups that I'd been involved in, and prior to my time as well, were being made again: playing the wrong brand of cricket, picking Test players and hoping they'd put some of the best one-day players in the world under pressure.

"Once I was appointed director of cricket, it was a case of well, if we're going to prioritise one-day cricket, what do we need? If we want to play that type of style, who is the right captain to embody that?

"That led me very quickly to Eoin Morgan. He has always been a guy who hasn't been afraid to do things his own way and to stick out from the crowd. He always had a very strong friendship with Brendon McCullum and instinctive desire to want to play that high tempo cricket. You can't force anyone to do that, it's got to be very comfortable with them. So it was natural that he would carry on," he said.

The immediate aftermath of that tournament saw Jason Roy, Jonny Bairstow, Adil Rashid and Liam Plunkett being brought into the squad for England's home series against New Zealand alongwith Jos Buttler and Ben Stokes being retained.

The impact was immediate.  In the first ODI, Joe Root and Buttler scored centuries as England scored 408/9 one of four 400-plus totals they would score in ODI cricket between the 2015 and 2019 World Cups. Steven Finn and Adil Rashid then picked four wickets each as England.

Injuries have since led to Finn falling out of contention but Morgan and the team management have backed that core that was formed in the New Zealand series while adding the likes of Moeen Ali and they all have been protagonists in all of England's big wins before the 2015 World Cup. The additions of Joffra Archer and Mark Wood just before the 2019 tournament added teeth to the bowling attack.

"Throughout the first couple of years as a side, none of the talk was results based. The talk in the dressing room was about changing our method," said Morgan. That method often translated to smashing as many runs as you can and making the opposition sweat in the chase. However, this led to concerns about a pace contingent that lacked teeth in limited overs. They seemed to have found a solution just before the 2019 World Cup however, with the addition of Joffra Archer and Mark Wood.

"We had to accept it would take time and develop trust by selecting players continuously, providing they played for the team with that one goal of trying to win the game with the bat or ball. If guys went for runs with the ball, as long as they stuck to trying to get wickets they would continue to be selected," said Morgan. "That has been worth its weight in gold because it has developed a lot of trust between the coach, captain and the players."

Morgan had said that he was jealous of New Zealand in 2015 because they had become the embodiment of playing fun cricket under McCullum. Four years later, with the World Cup trophy in his hands and a team that is unlike any country that his country has ever produced in the format, it would be safe to say that he is in a position that would incite jealusy from a number of his contemporaries

(The above story first appeared on LatestLY on Jul 17, 2019 09:08 AM IST. For more news and updates on politics, world, sports, entertainment and lifestyle, log on to our website latestly.com).