Faf du Plessis slammed South Africa’s first century in ICC Cricket World Cup 2019. This was also Du Plessis’ 12th ODI century and he reached the milestone in 93 deliveries that included seven fours and two sixes. He reached the landmark during the AUS vs SA match at Old Trafford in Manchester. 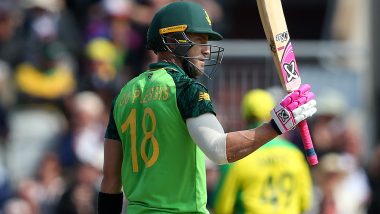 The 34-year-old stitched a partnership with Rassie van der Dussen to steady the South African innings after openers Quinton de Kock (52) and Aiden Markram (34) were dismissed after providing a good start to leave South Africa reeling at 114/2 at one stage. Both the players initially played with caution before taking charge of their innings and increasing the scoring rate.

Brilliant knock from the skipper, who's reached the milestone in just 93 balls. An emotional celebration from a proud captain 👏

Plessis could have reached the feat of scoring South Africa’s first century in CWC 2019 during the match against Sri Lanka but remained on 96 not-out as South Africa strolled to a nine-wicket victory. He was involved in a record 175-run partnership with Hashim Amla (80*) in the encounter. Their partnership is the second-highest partnership for South Africa in Cricket World Cups history for the second wicket.

Earlier, Du Plessis won the toss and elected to bat first. Opening main-stay Amla was left out of the playing XI after the 37-year-old hurt his knee during the final training session yesterday before the match against Australia. South Africa have already been knocked out of the World Cup after losing five of their eight matches. They have only won two games which came against Afghanistan and Sri Lanka respectively.

Meanwhile, Australia were the first team to qualify for the semi-finals. They have 14 points and are currently on top of the points table but must beat South Africa or hope India lose to Sri Lanka to remain at the top and play New Zealand in the semis. In case they finish second, England will be waiting at Edgbaston.

(The above story first appeared on LatestLY on Jul 06, 2019 09:01 PM IST. For more news and updates on politics, world, sports, entertainment and lifestyle, log on to our website latestly.com).