GT vs RR IPL 2022 Dream11 Team: Ravichandran Ashwin, Hardik Pandya and Other Key Players You Must Pick in Your Fantasy Playing XI

Both sides have been dominant in the league stage of the competition and now, would look to take the playoffs by storm. Gujarat Titans and Rajasthan Royals finished first and second on the points table respectively. 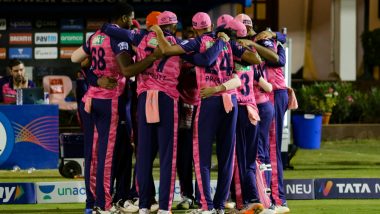 A lot of buzz that was making rounds a few weeks back as to who could make it to play-offs is finally over, as we head on to the first Qualifier match of the Tata IPL 2022 with Gujarat Titans (GT) playing opposite Rajasthan Royals (RR) in a determining match for the first finalist, on Tuesday, 24 May 2022 at 07:30 PM in Eden Gardens, Kolkata. Gujarat Titans and Rajasthan Royals ended up first and second on the points table respectively, after the group stage matches concluded. GT vs RR, IPL 2022 Qualifier 1 Live Cricket Streaming: Watch Free Telecast of Gujarat Titans vs Rajasthan Royals on Star Sports and Disney+ Hotstar Online

The upcoming match between the two teams will be a heated contest as both the sides have unveiled some tremendous performers and exhibited beautiful cricket so far, meanwhile we have picked up some star performers who have already done wonders this season and can possibly outshine once again in the first Qualifier match of IPL 2022 between Gujarat Titans and Rajasthan Royals

As rightly hailed by netizens, 'Hero in all formats',

Ravichandran Ashwin emerged as a dynamic all-rounder for Rajasthan Royals (RR) in IPL 2022. He scored 183 runs mostly batting down the order and took a total of 11 wickets in 14 group stage matches and gave some match-winning performances also. For the upcoming match which is a crucial one, Ashwin is among the top players from Rajasthan Royals to watch out for.

Presently Yuzvendra Chahal is the possessor of Purple cap with the most number of wickets in IPL 2022 group stage. Yuzvendra Chahal has bowled 56 overs and clinched 26 wickets, almost double the number of matches played. He no doubt remains one of our favourites throughout the season and a player to watch out for in the first Qualifier match of Tata IPL 2022 between Rajasthan Royals and Gujarat Titans (GT).

Another stunner from Rajasthan Royals Jos Buttler is the orange cap holder in IPL 2022 so far with his exemplary performance in the season. He racked up 629 runs and made three centuries and three half-centuries with a commendable strike rate of 147 in a total of 14 group stage matches. The English batter is the potential threat to the opponents and a player to watch out for as RR take on GT in their important encounter on Tuesday.

The passionate leggie of Afghanistan had a glorious season with the newly joined franchise Gujarat Titans (GT). Rashid Khan in 14 matches of IPL 2022 group stage has taken 18 wickets with the best figure of 4/24. Apart from bowling, Rashid Khan also contributed with the bat giving some match-winning performances. He is among the players who can change the course of the match with his heroics and will be among the players to watch out for in the first qualifier of the IPL 2022.

It won't be wrong to say that Hardik Pandya led the Gujarat Titans from the front and became part of every effort on the field to disclose the game plan and spoil the show of opponents in his maiden season as a captain that too for a new-comer franchise. Hardik Pandya's contribution remained extensive and scored 413 runs in 13 matches including overwhelming captaincy skills. He remains among the top players who can prove impactful on Tuesday as GT face-off RR in the qualifier match.

(The above story first appeared on LatestLY on May 24, 2022 04:06 PM IST. For more news and updates on politics, world, sports, entertainment and lifestyle, log on to our website latestly.com).