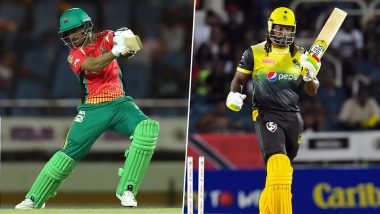 Guyana Amazon Warriors are on an unbeaten streak of eight matches and remain the only unbeaten team in CPL 2019, while their opponents, Jamaica Tallawahs have won just twice in nine games and lost seven others. The Chadwick Walton-led team, despite the presence of Chris Gayle, Imran Khan and Jerome Taylor, have struggled to win matches. Andre Russell’s injury added to the poor form of most of their players and regular disruptive changes have also hurt their chances. Meanwhile, take a look at what should be the best Dream11 team for the Guyana Amazon Warriors vs Jamaica Tallawahs game.

Players can select as many as four wicket-keepers for the match as per the latest Dream11 rules. But Glenn Phillips should be the ultimate choice ahead of the more fancied Nicholas Pooran. Philips has scored 353 runs in nine games with three fifties and has a strike-rate of 153.48. West Indies international Pooran, on the other, has not had the opportunity to bat in most matches.

You can choose a maximum of six batsmen in your Dream11 team, but it will be wise to play only four specialist batsmen. With Glenn Philips coming-in as a wicket-keeper, you already have one in-form batsman in the team. You can further select Brandon King and Chandrapaul Hemraj - the opening duo of Guyana - along with Chris Gayle and Shimron Hetmyer as the specialist batsmen in you Dream11 team.

Shoaib Malik has an average of 60 in CPL 2019 and also boasts a bowling average of 5.50 for the Guyana Amazon Warriors and should be the first choice for the all-rounders' role. Dwayne Smith, Sherfane Rutherford -- who has a strike rate over 200 and Chris Green can be the other choices for the all-rounder's role.

With three all-rounders in the side, the team has three places remaining and Imran Tahir, Imran Khan, Zahir Khan can be the best player for those sports in your Dream11 team. Tahir has been in phenomenal form, while Imran and Zahir Khan can be destructive with the ball. In case, things go awry, you also have Shoaib Malik and Chris Green to turn to.

Guyana Amazon Warriors have 16 points from eight games and have already qualified for the play-offs. Jamaica Tallawahs, on the other, have four points from a game more. Barbados Tridents and St Kitts and Nevis Patriots are placed third and fourth respectively in the team standings. Both have 10 points from 10 matches each.

(The above story first appeared on LatestLY on Oct 03, 2019 09:48 PM IST. For more news and updates on politics, world, sports, entertainment and lifestyle, log on to our website latestly.com).