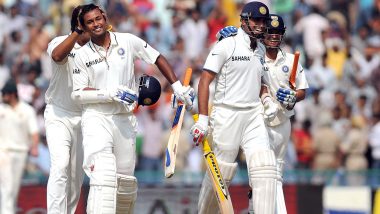 Former Indian batsman VVS Laxman was known for his gentle behaviour and calm nature alongside his prowess with the bat. However, fans saw his other side during India vs Australia Test at Mohali in 2010. In the high-voltage encounter, Laxman was seen screaming at Pragyan Ojha after the latter denied taking a single. Suresh Raina, who was Laxman’s runner in that game, recalled the encounter and said that he never saw Laxman so angry before. The Hyderabad-born cricketer was suffering from back pain in that game. However, that didn’t restrict him from playing a stellar knock. MS Dhoni Supported Me Because of My Talent: Suresh Raina Responds to Yuvraj Singh.

“Laxman had a back spasm so I had to go in as his runner. I had never seen Laxman so angry. He was like ‘Run Ojha Run!’ Before that Ishant Sharma was there with him. Mitchell Johnson was reversing the ball,” Rains told Aakash Chopra in a YouTube interview.

The left-handed batsman, who scored 86 runs in India’s first innings, said that he was ready to give his all while running between the wickets as it was necessary for Laxman to stay at the crease till the end. “I was prepared to dive for anything. I had decided that I’ll dive if I have slightest of doubts because Laxman had to stay there,” he added.

Chasing 216 for victory, the MS Dhoni-led side was reeling at 8-124 and Australia’s win looked inevitable. However, Laxman had different ideas as he made a sensational fight back. He piled up 81 runs with Ishant Sharma for the ninth wicket and eventually guided India to a one-wicket triumph. Laxman remained unbeaten at 73 while Ojha also made five vital runs.

(The above story first appeared on LatestLY on Jun 03, 2020 02:29 PM IST. For more news and updates on politics, world, sports, entertainment and lifestyle, log on to our website latestly.com).