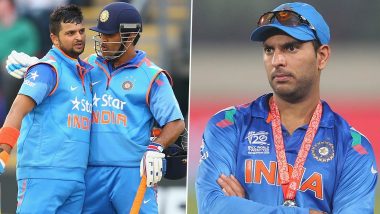 Out-of-favour Indian batsman Suresh Raina finally reacted towards Yuvraj Singh’s claim of him being MS Dhoni’s ‘favourite player’ during the wicket-keeper batsman’s captaincy tenure. Raina said that he certainly got a lot of backing from Dhoni but due to talent. Not too long ago former Indian all-rounder Yuvraj Singh, who has been quite vocal in criticizing the team players and management after his retirement in 2019, said that Raina was supported by India’s then skipper MS Dhoni even when the left-handed batsman was not in good form. However, Raina has opened up about his former teammate’s remarks. Every Captain Has a Favourite, Think MS Dhoni Really Backed Suresh Raina, Says Yuvraj Singh.

"I would say MS (Dhoni) definitely supported me, he supported me because he knew I have talent, I've done it for him, CSK and Team India, whenever he supported me. The best part about him is that he will tell you after two games, 'If you don't score, I've to take a big step.' I said just give me one or two games, I will make sure not to repeat mistakes," Raina told during an interaction for FanCode.

Further showering praises on the Ranchi-born cricketer, Raina hailed Dhoni as best ever Indian captain after Sourav Ganguly. "I am thankful to MS because he's always been my great admirer and he always knew what sort of talent I have. I think it's all destiny. He's the greatest captain we had after Dada (Sourav Ganguly), so I think we should really enjoy things when we play the World Cup,” added the CSK star.

Talking about the opportunities he got while playing for the national side, Raina said: "God has been kind in all difficult situations, it's difficult to say now that I got less or more chances, I am happy that I was part of that World Cup, he supported me, I delivered, so I think I can't ask for more."

Raina, who played his last international match back in July 2018, is optimistic about his comeback in the Indian squad. His next assignment was set to get underway with the start of Indian Premier League (IPL) 2020 where he plays for Chennai Super Kings. However, just like many major cricket tournaments, the T20 extravaganza has also been called off owing to the coronavirus crisis.

(The above story first appeared on LatestLY on May 27, 2020 04:16 PM IST. For more news and updates on politics, world, sports, entertainment and lifestyle, log on to our website latestly.com).