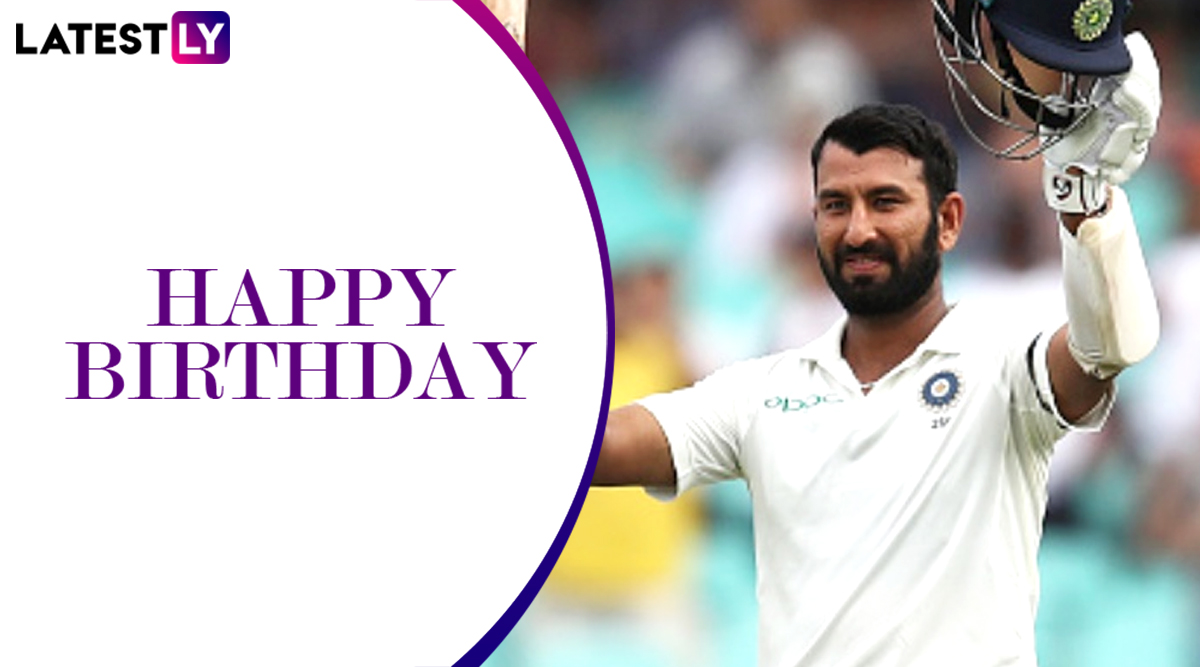 India's modern-day wall, Cheteshwar Pujara celebrates his 32nd birthday on Saturday. Born on January 25, 1988, the right-handed batsman is the mainstay of India's batting line up in the longest format of the game and his record speaks for himself. The Saurashtra-born cricketer is blessed with a rock-solid defence and has been proven a headache for many potent bowling line-ups in the world. Be it scoring runs in the bouncy tracks of Adelaide or tackling the spinners at the rank-turner deck of Feroz Shah Kotla, Pujara has all the attributes to thrive in Test cricket and below, we'll look at five of his best Knocks. Cheteshwar Pujara Scores His 13th Double Hundred in First-Class Cricket.

When Rahul Dravid bid adieu to the game in 2012, many Indian cricket fans were in puzzlement that who could fill the boots of the legendary cricketer. However, Pujara didn't take long in proving his mettle and made sure that the no. three is in safe hands. To date, the talismanic batsman has scored 5740 runs in 75 Test which comprise of 18 centuries as well. Also, he is currently at the sixth spot in the latest ICC Test batting rankings and will eye to go at the pinnacle soon. Meanwhile, let's look at five of best innings played by Cheteshwar Pujara as he turns 32.

193 Against Australia in Sydney

Pujara enjoyed the form of his life when India toured Australia in 2018-19. The batsman scored runs for fun and made a mockery of a potent Aussie bowling line-up. However, his highest score in the series came in the fourth and last Test. Batting first, Pujara came into bat after the loss of the first wicket and made the match a one-man show. He scored runs all over the park and went to on to play a marathon knock. He, however, fell seven runs short of his double ton but guided his side to 622/7 in first innings. Nevertheless, the encounter got affected by rain and resulted in a draw.

202 Against Australia in Ranchi

Another Pujara special against Australia was seen in the third Test of Australia’s 2017 Tour of India. Batting first, the visitors scored 451 runs and put the home side of the back foot. However, Pujara came and started doing what he is good at. The batsman gave no chance to the opposition bowlers to pierce his defences and played a marathon knock. He went on to score his third double ton in Test and played 525 deliveries during the course of his innings, which are most for any Indian batsman. As a result, India went on to score 603 runs in the second innings and the match resulted in a draw.

101* Against New Zealand in Indore

Known for his ability to pace the innings steadily, Pujara displayed his aggressive batting style during the third Test of New Zealand’s 2016 Tour of India. In the third innings of the match, the star batsman attacked the bowlers and scored runs at all over the park. On a Day 3 deck, Puajra brilliantly tacked the Kiwi spinners and accumulated runs with immense ease. He went on to score a blistering century in order to guide his side to 216/3 in the third innings and a 321-run win.

145* Against Sri Lanka in Colombo

After warming the benches in the first two Tests of India’s 2015 Tour of Sri Lanka, Pujara was asked to open the innings in the third and last match and he didn’t disappoint. On a track, where no other Indian batsman was able to settle his feet, Pujara didn’t put his guards down and kept his wickets safe. The likes of Virat Kohli and Ajinkya Rahane came and gone in front of him. However, no fact was able to break his resilience as he brought up a sensational ton. Pujara scored 145 runs in total and was unbeaten till the end. Riding on his brilliance, India scored 311 runs in the first innings and clinched the match by 117 runs.

153 Against South Africa in Johannesburg

Tackling the likes of Morne Morkel, Dale Steyn and Vernon Philander on a track like Johannesburg is certainly not an easy task but all these factors couldn’t restrict Pujara from scoring a scintillating ton in the first Test of India’s 2013 Tour of South Africa. After falling for just 25 in the first innings, the batsman made an impeccable comeback in India’s second innings and played a stellar knock. He scored 153 runs and guided the visitors to a massive total of 421 runs in the first innings. Nevertheless, the Proteas batsman made a comeback in the last innings and the match ended in a draw.

As of now, the batsman is playing for Saurashtra is the ongoing Ranji Trophy 2019-20. He has displayed some of his brilliance in the tournament too and has played some terrific knocks. In fact, Pujara also scored a fantastic double hundred against Karnataka. For the national side, he will be next seen in the two-Test matches of India’s 2020 Tour of New Zealand and his side will expect him to play some significant knocks there too.