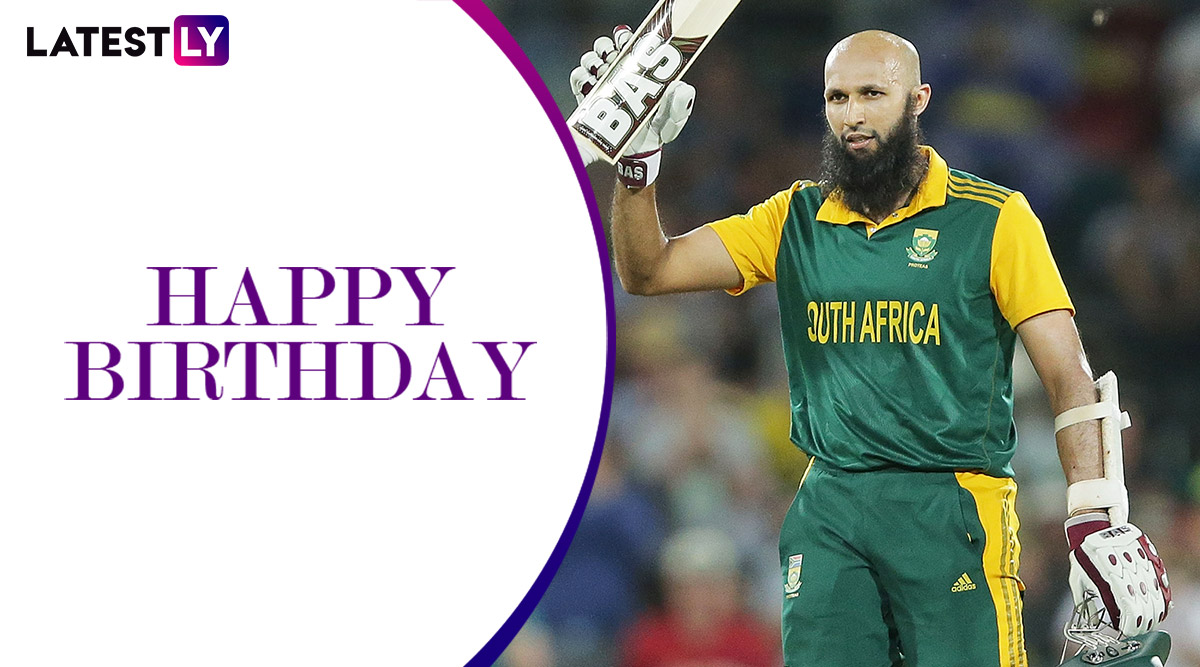 One of the greatest batsman to have donned the South African Jersey, Hashim Amla celebrates his 37th birthday on Tuesday (March 31, 2020). The former batsman was one of finest stroke-makers of the game and his record in international cricket is simply sensational. Touted to be a Test specialist at the start of his career, Amla proved his mettle in white-ball cricket too and played several quick-fire knocks. In fact, he is the fastest batsman to reach the landmark of 2000, 3000, 4000, 5000, 6000 and 7000 ODI runs. Below, we'll look at some of his best knocks. Imran Tahir Birthday Special: 5 Times When South African Leg-Spinner Destroyed Opposition Batting Line-Up.

Making his debut in November 2004, the star batsman served South African cricket for a decade and a half. Speaking of his international record, the right-handed batsman scored 9282 runs in 124 Test matches which comprises of 28 centuries. Amla has also scored 8113 runs from 181 matches, registering 27 centuries in the process. In T20Is, the veteran scored 1277 runs from 44 games. Now, let's look at some of Amla's stellar knocks as he turned 37.

311* Against England in London

The first Test of South Africa's 2012 Tour of England saw Amla becoming the first and only Proteas batsman to score a triple century in Test cricket. Coming to bat at number three after the early fall of Alviro Petersen, the right-handed batsman didn't put a foot wrong and brilliantly tackled the opposition bowlers. Veterans like James Anderson and Stuart Broad looked completely ineffective against the Proteas star and were smashed ti various parts of the ground. Amla went to score a memorable ton and riding on this effort, the visitors clinched the target by an innings and 12 runs.

253* Against India in Nagpur

South Africa were tottering at 6/2 during the first Test of their 2010 Tour of India. However, Amla stepped forward and completely changed the course of the game. The batsman assessed the conditions well and didn't give and brilliantly tackled the Indian bowlers. Be it pace or spin, Amla rose to every challenge and scored a magnificent double ton. Courtesy his brilliance, the Proteas declared at 558/6 in the first innings. The home side couldn't achieve the total even in two innings and eventually lost the match by an innings and six runs.

196 Against Australia in Perth

Facing the fearsome Australian pace battery at the traditional Perth track is one of the last things a batsman will want. However, Amla rose to the challenge in the third Test of South Africa's 2012-13 Tour of Australia and played a stellar knock. In the third innings of the game, Amla showcased solid technique and great temperament while facing the thunderbolts of Mitchell Johnson and Mitchell Starc. He went on to make 194 runs in total, guiding the visiting side to a 309-run triumph.

150 Against England in Southampton

The right-handed batsman enjoyed a dream run during Proteas' 2012 Tour of England. One of his best knocks in that series came in the second ODI. Opening the innings while batting first, the star batsman got off to a steady start. However, he went after the bowlers after getting his feet settled and gathered runs all over the park. He scored his 10th ODI ton and guided his 124-ball 150 guided the visiting side to 287/5. In reply, none of the England batsmen were able to pile a significant score as the Alastair Cook-led side eventually got bundled out for 207 runs, losing the match by 80 runs.

133 Against West Indies in Centurion

The Proteas side lost two early wickets in the 5th ODI of West Indies' 2014-15 Tour of the rainbow nation. However, Amla wasn't ready to put his guards down as he fought back brilliantly. Joining forces with Rilee Rossouw, the opener brought the South African innings back on track and set a great base for an onslaught. In the latter half of the innings, the skipper went all guns blazing and rained fours and sixes. His scintillating century guided the hosts to 361/5 runs. In the second innings, the Caribbean side never looked in the hunt and as a result, they lost the game by 131 runs.

Amla bid adieu to international cricket after the conclusion of ICC Cricket World Cup 2019 and gave a great breather to bowlers all around the world. Post-retirement, the batsman featured in several T20 and county games. Well, the Proteas side is going through a transition period at the moment and will want to find Alma's successor as soon as possible.