Happy Birthday Trent Boult. Boult has been regarded as one of the finest bowlers to ever play cricket for New Zealand. The professional life of the left-hand pacer is well-known, so here we look at some of the lesser-known things related to his personal life. 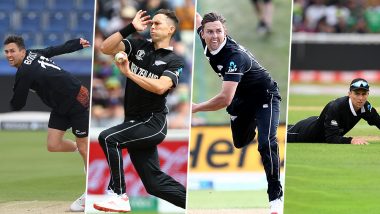 New Zealand cricketer Trent Boult is celebrating his birthday on Monday, July 22. The Kiwi pacer, who played a great role in New Zealand team in World Cup 2019 recently, turned 30. Boult has been regarded as one of the finest bowlers to ever play cricket for New Zealand. He holds 2nd rank in ICC ODI bowler's ranking at present. Since his debut in December 2011, Boult has been a spectacular cricketer to look upon. He has played a total of 61 Tests, 89 ODIs and 25 T20s so far and clinched 246, 164 and 37 wickets respectively, which are very astonishing figures to take a look. The professional life of the left-hand pacer is well-known, so here we look at some of the lesser-known things related to his personal life. Trent Boult on Coping with CWC 2019 Heartbreak, 'Will Take Dog for Walk by Beach.

Trent Boults' elder brother Jonathon Boult (Jono Boult) is a former New Zealand cricketer. Jono played for Northern Districts in first-class cricket. He was a right-arm medium-fast bowler. He played as a twelfth man during New Zealand's first Test against India in 2009.

Trent Boult has a pet dog named Louie, who lives with him at his home at Mt. Maunganui, New Zealand. Boult had shared a photo with his dog on his Instagram profile earlier. Have a look.

Trent Boult has been a great support for the New Zealand team at present. He took 17 wickets in World Cup 2019 and he also bowled the two important overs during dramatic CWC 2019 Final against England. Boult also bowled the final over the match when England needed 15 runs, giving out only 14 to take the match in tie. Later he also bowled the super over in which he gave away 15 runs.

Unfortunately for New Zealand, England won the match on boundaries count after super over too ended in a tie. Boult also came into limelight after bagging a hat-trick during World Cup 2019. He became the first Kiwi bowler to bag a hat-trick in World Cups. As the New Zealander turns 30, we hope that he will reach even new heights in bowling in the coming future.

(The above story first appeared on LatestLY on Jul 22, 2019 08:01 AM IST. For more news and updates on politics, world, sports, entertainment and lifestyle, log on to our website latestly.com).