Ben Stokes is arguably the best all-rounder going around and many experts even believe that no current player is even close to Stokes’ all-round abilities. Nevertheless, former Indian all-rounder Irfan Pathan believes that Hardik Pandya can produce ‘similar result’ as the England southpaw. 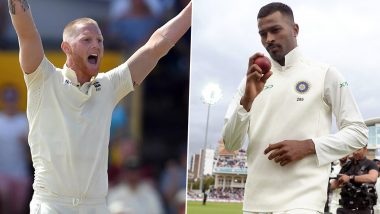 England all-rounder Ben Stokes has been enjoying the form of his life and his recent performances are nothing but sensational. Batting, bowling or fielding, Stokes is a force to reckon with in all the three departments and has played a vital role in England’s recent success across formats. The talismanic cricketer is arguably the best all-rounder going around and many experts even believe that no current player is even close to Stokes’ all-round abilities. Nevertheless, former Indian all-rounder Irfan Pathan believes that Hardik Pandya can produce ‘similar result’ as the England southpaw. However, the former Indian cricketer also accepted that India have many talented all-rounders but no one has been able to replicate Stokes’ heroics. Irfan Pathan Wishes for ‘Ben Stokes-Like Match-Winning All-Rounder’ in Indian Team.

“We have potential in the country,” Pathan said while featuring on Star Sports’ show Cricket Connected. “It’s not like we don’t have any potential. We have Hardik Pandya, we tried Vijay Shankar for some time. We have guys who bowl spin and are all-rounders like Ravichandran Ashwin and Ravindra Jadeja, but the kind of match-winning impact you want to have from a fast-bowling all-rounder, you need to make sure that these guys, the names I took, should come up, go out there and win matches for your country to be in the same league as Ben Stokes.” Gautam Gambhir Praises Ben Stokes, Says Can’t Compare Anyone in India to the England All-Rounder.

Pandya has been a vital cog of Indian team ever since his debut in 2016. He has played some brilliant knocks lower down the order. However, he hasn’t got a chance to anchor his side’s innings like Stokes. In the bowling department, Pandya has been providing his side crucial breakthroughs but is also accused of leaking runs.

“If you look at Hardik Pandya’s career, even in the small number of matches, he needs to go one or two steps ahead of what he’s doing at the moment,” Pathan said.” It’s all about winning matches. No doubt, he’s got all the potential, which he has, and in terms of support that he is getting as well,” Pathan added.

Pathan, however, also highlighted the fact Pandya bats lower down the order in comparison of Stokes. However, promoting the Baroda-born cricketer could unleash his skills.

“But, looking to bat higher up the order, then the team combination comes into play. He’s doing that – when it comes to batting up the order for Mumbai Indians and he’s delivering that. If it happens for Indian cricket, with the kind of combination that they are looking at, he might be able to produce a similar result which Ben Stokes [does]. But he has to do that, not just ‘we’re talking about it’. The potential needs to convert into performances,” he concluded.

(The above story first appeared on LatestLY on Jul 27, 2020 07:18 PM IST. For more news and updates on politics, world, sports, entertainment and lifestyle, log on to our website latestly.com).