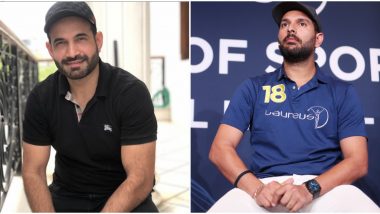 Ben Stokes produced another scintillating all-round performance to help England beat West Indies by 113 runs and level the three-Test series 1-1 with a game remaining. Stokes won admirers all over the world with his brilliant all-round performance, which included a century, fifty and three wickets. Former India all-rounder Irfan Pathan was also mighty impressed with the 29-year-old and claimed that the Indian cricket team would have been invincible if they had a match-winning all-rounder like Stokes. Kevin Pietersen Hilariously Trolls Yuvraj Singh After Manchester United Lost to Chelsea in FA Cup 2019-0 Semi-Final.

Stokes performed brilliantly both with the ball and bat to help England win the game. Coming to the crease with England three wickets down, Stokes stitched a 260-run partnership with Dominic Sibley and steered England over the 400-run mark in the first innings. Sibley and Stokes both scored centuries. Yuvraj Singh, Shubman Gill Sweat Out in Gym Together As ‘Thugs of Punjab’ Get Ready for the Season (Watch Video).

Then in the second innings with England needing to score quickly, he was sent as an opening batsman and he once again delivered with a quick-fire 78 off just 57 deliveries. With the ball too, Stokes was brilliant and provided his side with two important breakthroughs across both innings.

Pathan, who represented India in 29 Tests, 120 ODIs and 24 T20Is, was very impressed with the Englishman's all-round performance and tweeted: “Indian cricket will be unbeatable anywhere in the world if they have a match-winning all-rounder like @benstokes38 #matchwinner.” Pathan was certainly right with India still lacking an all-rounder of Stokes’ calibre.

Hardik Pandya has been the team’s no 1 all-rounder but has failed to produce match-winning performances on a consistent basis. The 26-year-old has also been plagued with frequent back injuries. His replacements, Vijay Shankar and Shivam Dube failed to grab opportunities with both hands.

In reply, Pathan wrote that the one match-winning all-rounder India had has already retired. "Bro Yuvraj Singh has retired,” said the former left-arm pacer. Yuvraj was the Man of the tournament in India’s 2011 World Cup win and was also the catalyst in the team’s 2007 ICC World T20 victory.

Both Pathan and Yuvraj Involved in a Banter

The left-handed all-rounder, however, called time on his career in 2019 after being kept on the sidelines for two years. Pathan himself was one of India’s most promising all-rounders. He, initially, started as a left-arm fast bowler but developed his batting skills and even opened the batting for India on a couple of occasions. He has scored over 1000 runs in both Tests and ODIs and also has taken over 300 wickets.

Yuvraj too praised Patah’s all-round skills and wrote “I knew that was coming! Waise aap bhi kuch kam nahi they! (You weren’t any less).” Meanwhile, England and West Indies face-off in the final Test match at Old Trafford on July 24.

(The above story first appeared on LatestLY on Jul 22, 2020 10:02 PM IST. For more news and updates on politics, world, sports, entertainment and lifestyle, log on to our website latestly.com).