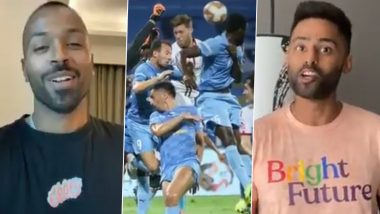 An exciting contest is undoubtedly on the cards as Mumbai and ATK have been two of the strongest teams this season and deservedly qualified for the summit clash. The Islanders, who topped the league stage, are indeed tad favourites as they defeated the Mariners in both their meetings earlier this season. However, they can’t afford to be complacent as ATK Mohun Bagan haven’t also done much wrong. Meanwhile, let’s look at how MI stars cheered for Mumbai City FC.

Out to make #AamchiCity proud! 🏆

Notably, the Amrinder Singh-led side are coming off a thrilling win against FC Goa. The rubber went to the penalty shootout following a 2-2 draw on aggregate. The Islanders progressed to the final after defeating the Gaurs 6-5 in the shootout. On the other hand, ATK Mohun Bagan defeated NorthEast United FC with an aggregate win of 3-2 over the two legs of the second semi-final.

(The above story first appeared on LatestLY on Mar 13, 2021 06:23 PM IST. For more news and updates on politics, world, sports, entertainment and lifestyle, log on to our website latestly.com).