Hardik Pandya to Join Team for Current Series in New Zealand, KL Rahul to Be With India A, After COA Lifts Ban on Cricketers 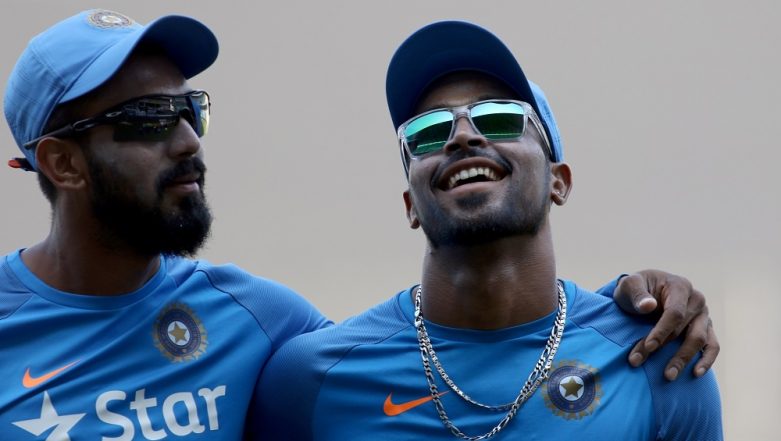 "Hardik Pandya will be sent to New Zealand to join the team at the earliest and KL Rahul will join the India A squad to play the last 3 one-day games against England Lions," it read. India are 1-0 up in the five-match ODI series and the second rubber is on Saturday. India A team will play 5 one-day games against England Lions. Virat Kohli on KL Rahul & Hardik Pandya Koffee With Karan 6 Episode: ‘Responsible Cricketers Don’t Align With Those Views, Those Were Individual Opinions’.

Skipper Virat Kohli has been rested for the final two ODIs and the subsequent three-match Twenty20 International (T20I) series. The Supreme Court appointed Committee of Administrators (CoA) lifted the suspensions of Pandya and Rahul with immediate effect. It was imposed for their objectionable comments on a television talk show. Rahul Dravid Reacts on Hardik Pandya, KL Rahul KWK 6 Controversy; Says 'Let’s Not Overreact Please'.

The two players, who were sent home from the Australia tour, have already missed out on four One-Day Internationals (ODI), three against Australia and the opening match of the five-ODI series against New Zealand.

"The Committee of Administrators (CoA) had, by emails dated 11.01.2019, and in exercise of Rule 41(6) of the Constitution of BCCI, suspended Hardik Pandya and KL Rahul in view of the allegations of misconduct against them, pending adjudication of the allegations under Rule 46 of the approved BCCI Constitution," a BCCI statement said.

"Since the adjudication of all allegations of misconduct against any cricketer registered with, inter alia, the BCCI is required to be undertaken by the BCCI Ombudsman, whose appointment is pending directions of the Supreme Court of India, the CoA is of the view that the interim suspension orders dated 11.01.2019 should be presently lifted with immediate effect.

"The above matter and decision has been taken with the concurrence of the Learned Amicus Curiae, P.S. Narasimha. In view of the above, the suspension orders dated 11.01.2019 is immediately lifted pending appointment and adjudication of the allegations by the BCCI Ombudsman," the statement added. When contacted by IANS, CoA member Diana Edulji refused to comment on the issue.

Comments
Tags:
Board of Control for Cricket in India Hardik Pandya India vs New Zealand ODI Series 2019 Koffee With Karan 6 Lokesh Rahul Sexist Remarks
Comments
You might also like