As the Indian middle-order is relatively inexperienced, Dhoni's experience to pace the inning and score big towards the death will be like gold to Team India in the prestigious quadrennial event. 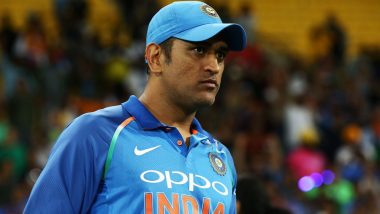 New Delhi, May 19:  "Dhoni finishes off in style. A magnificent strike into the crowd! India lift the World Cup after 28 years!" exclaimed Ravi Shastri on commentary as M.S. Dhoni led India to a win in the final of the 2011 World Cup at the Wankhede Stadium in Mumbai with a humongous six off Sri Lanka pacer Nuwan Kulasekara. ICC Cricket World Cup 2019: MS Dhoni's 'Priceless' Presence Gives Me Freedom, Says Virat Kohli.

Eight years later, roles have changed. Dhoni is no longer the captain of the team. Shastri is now the head coach of the squad led by Virat Kohli. And more importantly, Dhoni himself doesn't enjoy the role of the finisher as much as he did in his prime. Failures have come thick and fast in the last two seasons and even Dhoni hasn't escaped the public scrutiny.

In fact, Dhoni had a horrid time the last time he played for India in England. In the three-match ODI series played last year, Dhoni was completely out of form and lacked that finesse and tenacity which one associates with the wicketkeeper-batsman. His strike rate was so slow that he was even booed at Lord's when India were chasing 323. Dhoni managed to score only 79 runs from 125 balls in two innings against England and was heavily criticised by the pundits as well.

Dhoni might be ranked as one of India's most successful captains, but after the England tour, questions were raised on his approach to batting with some even suggesting that he was detrimental to the team's hopes at the upcoming World Cup. Ahead of ICC Cricket World Cup 2019, Here’s a Look at Blistering Knocks by Inzamam-Ul-Haq, MS Dhoni, Sachin Tendulkar and Others at CWC Over the Years (Watch Videos).

However, like many great cricketers, the 37-year-old didn't answer the critics with his words but instead gave fitting replies with the bat, scoring runs in bulk thereafter. He has been in exceptional form this year: in nine ODIs, he has scored 327 runs, hitting four half-centuries, three of them in a row during the tour of Australia.

He continued his form in the recently concluded IPL as well and scored 416 runs in 5 matches he played for the Chennai Super Kings (CSK). Additionally, his average of 83.20 ended up as the season's best.

Knowing Dhoni, fans can be rest assured that he would be roaring to make amends to his record in England and score big for India when they take the field in the World Cup beginning May 30.

In the three World Cups Dhoni has played so far, he has scored 507 runs in 17 innings at an average of 42.25, his best being that of famous 91 not out which came against Sri Lanka in the final of the 2011 edition at the Wankhede.

As India will aim to clinch their third World Cup trophy, it becomes all the more important that Dhoni continues his form, not just in batting but in terms of his tactical brilliance and extra-ordinary wicket-keeping skills. ICC Releases Official World Cup 2019 Theme Song ‘Stand By’, By LORYN and Rudimental (Watch Video)

As the Indian middle-order is relatively inexperienced, Dhoni's experience to pace the inning and score big towards the death will be like gold to Team India in the prestigious quadrennial event. In wicket-keeping, Dhoni's lightning quick stumpings and catches would be crucial for Team India when they take on the opposition teams on high-scoring England pitches.

However, there is still a question mark over where he will bat. The number four role seems a possibility, although there is plenty of competition for that role. India have tried out a lot of players, and with the inclusions of Dinesh Karthik, Vijay Shankar and K.L. Rahul in the World Cup squad, they are no closer to arriving at a conclusion and it would only be in England when the fans will get to know where Dhoni will bat.

Dhoni's importance in the Indian cricket set-up has been time and again highlighted by many, including the likes of current skipper Virat Kohli, who thinks that no one has contributed more to Indian cricket than Dhoni. Besides all these qualities, Dhoni brings to the side the much-needed calmness which becomes of utmost importance in a cliffhanger of humdinger in the World Cup. If Dhoni can continue to remain as consistent as he has been for Team India and CSK over the last decade, then the Men in Blue would sail smoothly to victory and give a fitting farewell to Dhoni who, in all likelihood, will be playing his last World Cup. Ahead of ICC Cricket World Cup 2019, Here’s 5 Disheartening Moments From Cricket’s Mega Tournament That Made Fans Emotional (Watch Videos)

However, it will be fascinating to watch how the drama unfolds in England and if Dhoni can inspire India to their third World Cup title and finish it on a high.

(The above story first appeared on LatestLY on May 19, 2019 11:27 AM IST. For more news and updates on politics, world, sports, entertainment and lifestyle, log on to our website latestly.com).