The Men in Yellow peaked at the right time and displayed serious brand of cricket Australia is known for in the semis and final. Meanwhile, here’s a look back at Australia’s road to T20 World Cup title triumph. 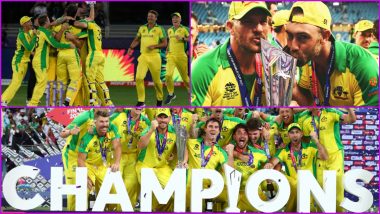 Australian men’s cricket team finally added T20 World Cup trophy to their cabinet. The T20 World Cup came into existence in 2007 and since then Australians were distanced from the trophy. Finally, on November 14 in the United Arab Emirates (UAE), under Aaron Finch, Australia registered their maiden T20 title win. A win over Trans-Tasman neighbours New Zealand saw Australia conquer the World! Coming into the tournament Australia were struggling and were probably the least favourites among top teams to win the title. NZ vs AUS Stat Highlights T20 World Cup 2021 Final: David Warner, Mitch Marsh Shine As Australia Win Their Maiden T20I Title.

However, the Men in Yellow peaked at the right time and displayed serious brand of cricket Australia is known for in the semis and final. Meanwhile, here’s a look back at Australia’s road to T20 World Cup title triumph.

Australia were placed in Group 1 alongside England, South Africa, Sri Lanka, defending champions West Indies and Bangladesh. Out of five matches, Australia won four games and finished second on the points table thanks to their better run-rate than South Africa. Australia’s lone defeat in the Super 12 came against England.

In the semi-final, Australia were up against favourites and Group 2 toppers Pakistan. The Babar Azam-led side was the only unbeaten side in the tournament going into the semis. However, Australia chased down 177 with five wickets to spare in 19 overs to knock out Pakistan and make it to the semis. T20 WC 2021 Final: Australia Celebrates Victory in Style After Claiming the Title, Players Behold the Tradition of Shoey (Check Post).

It was the repeat of 2015 ODI World Cup final as Australia and New Zealand locked horns for the summit clash. Put to bat first, New Zealand posted 172. Australia chased it down in 18.5 overs with eight wickets in hand. David Warner and Mitchell Marsh scored half-centuries each to help Australia register their maiden T20 World Cup title triumph.

(The above story first appeared on LatestLY on Nov 15, 2021 03:45 PM IST. For more news and updates on politics, world, sports, entertainment and lifestyle, log on to our website latestly.com).