Ahead of India's series opener against South Africa in New Delhi, head coach Rahul Dravid had spoken about how he was someone who liked to have consistency in the playing eleven, giving players time and making them feel settled in the positions. 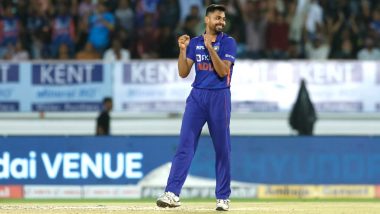 Rajkot, June 18: Ahead of India's series opener against South Africa in New Delhi, head coach Rahul Dravid had spoken about how he was someone who liked to have consistency in the playing eleven, giving players time and making them feel settled in the positions. Despite losing the first two matches, India didn't tinker with their playing eleven, as Dravid continued to keep his faith on the playing eleven. In India's 82-run win over South Africa at Rajkot, pacer Avesh Khan repaid the faith in him despite going wicketless in the first three matches, picking a career-best haul of 4/18 to skittle out the visitors for 87. IND vs SA 5th T20I 2022, Bengaluru Weather, Rain Forecast and Pitch Report: Here’s How Weather Will Behave for India vs South Africa Match At M Chinnaswamy Stadium.

"The team hasn't changed over four games, so credit to Rahul (Dravid) sir. He gives chances to everybody and intends to give them a long enough run. He doesn't drop a player after one or two bad performances because you cannot judge a player on the basis of one or two matches. Everyone is getting enough matches to prove themselves. "Yes, there was some pressure on me. I had zero wickets in three games but Rahul sir and the team management trusted and gave me another opportunity today and I ended up picking four wickets. I feel very happy and it's also my papa's birthday, so one can say it's a small gift for him too," said Avesh after the match. IND v SA, 4th T20I 2022: Dinesh Karthik One of the Best Finishers in the Game, Says Keshav Maharaj.

The pitch for India's series-levelling win at Rajkot wasn't an easy one for the batters, barring Dinesh Karthik's blistering 55 off 27 balls as pacers got assistance from movement and variable bounce. Avesh revealed that after seeing the first innings and having a chat with opener Ishan Kishan, he had decided on bowling hard lengths. "Whenever we are batting first, I always end up asking the batters how the wicket played, whether it was flat, two-paced or slow. I spoke to Ishan (Kishan) and he said that bowling hard length balls will be good as they aren't easy to play; some are bouncing, some are stopping and the others are keeping low. After first innings ended, I planned to attack the stumps and bowl the hard lengths consistently. It's in my hands to bowl well, not pick wickets and try hard to follow my process.

"The slower ball wasn't very effective on today's wicket, so I tried to bowl hard lengths with the occasional bouncer to change things up. Today's wicket wasn't easy for batters, it was two-paced although DK bhai, Hardik and Rishabh in between all played well. 170 was a very good total on this wicket and all we wanted to ensure was pick a couple of wickets in the powerplay to get a good grip on the game," concluded Avesh.

(The above story first appeared on LatestLY on Jun 18, 2022 06:00 PM IST. For more news and updates on politics, world, sports, entertainment and lifestyle, log on to our website latestly.com).