IND vs ENG 5th Test: Joe Root Says, 'I Am Sure Ben Stokes Has Got the Plans for the India Test in Place' 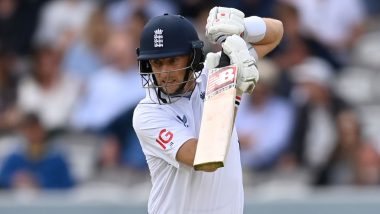 Leeds, June 28 : England skipper Ben Stokes has credited picking "the best players for every position" and new coach Brendon McCullum for the "unbelievable" 3-0 series win against reigning World Test champions New Zealand here. England crushed the visitors by seven wickets in the third and final Test at Headingley with former Test captain Joe Root (86 not out) and Jonny Bairstow (71 not out) fittingly at the crease to guide the home team to victory. Who Will Captain India if Rohit Sharma is Unavailable? Virat Kohli, Rishabh Pant or Jasprit Bumrah? India Stare at Captaincy Puzzle Ahead of Birmingham Test.

It's been a massive turnaround for England since the time they lost the two-Test series to New Zealand at home in 2021, followed by the 0-4 Ashes debacle and the 0-1 Test series loss against the West Indies. Stokes said the clean sweep against the Black Caps was a dream-come true. "It has gone really well. A 3-0 win against the best team in the world; it's absolutely phenomenal. It's about the change of the mind-set of the lads towards Test cricket. To say that we have done it so quickly is unbelievable.

"Huge credit to Brendon (McCullum) and the backroom staff. Trent Bridge (2nd Test) was incredible but being 55/6 and then doing what we did and the manner in which we did was the most pleasing thing. It has really set the level people want to come in and perform for the Test side. (Matthew) Potts has taken it like fish to water. (Stuart) Broad, even at 36, bowling these many overs, and fantastic to see (Jack) Leach (10-wicket haul in third Test). "When we got together, we picked the players who offer the best in every position. (Ollie) Pope's been fantastic, carrying his form from Surrey and showing the world what Pope is about," said Stokes. Graeme Swann Feels Edgbaston Would Suit Ravichandran Ashwin’s Type of Bowling.

Stokes, however, believed that India will be much tougher than the New Zealand side when the two teams square off for the rescheduled fifth Test of last year's series at Edgbaston from July 1. "India are a different opposition but we will come out with the same mind-set," said Stokes. Root, who was adjudged 'Player of the Series' said, some of the cricket his side, especially Jonny Bairstow, played was more like 50-over stuff. "It was like some of the 50-over stuff. He (Bairstow) has been hitting the ball really well. He has been a phenomenal player. It's great to see him do that, to bat with the confidence and freedom. One of the great things about this series was guys keep getting more and more confident about how they want to go about it."

He said that the key to success in Test cricket is to enjoy the game, adding that Stokes would have sorted out the game plan he will like to enforce against India at Edgbaston. "It's important that we enjoy this series. It has been a rocky road for the Test series. If you cannot enjoy this series, then what do you play for? I think we should concentrate on what this team has done over the last few weeks. I am sure Ben (Stokes) has got the plans for the India Test and the next series as well."

(The above story first appeared on LatestLY on Jun 28, 2022 02:00 PM IST. For more news and updates on politics, world, sports, entertainment and lifestyle, log on to our website latestly.com).