New Zealand began the day five with Kane Williamson and Ross at the crease. After battling out the first hour, the Kiwis lost way when Mohammed Shami removed Taylor. Shami then ended up picking four wickets. 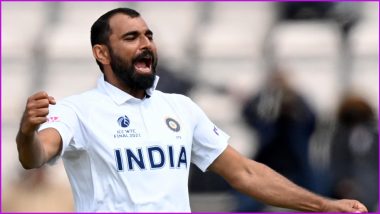 India vs New Zealand ICC World Test Championship (WTC) final enters the reserve day after rain spoiled play on day one and day four. Meanwhile, at the end of day five, at stumps, India were 64 for two, effectively 32, with Cheteshwar Pujara and Virat Kohli at the crease. While Pujara was batting on 12 off 55 balls, Kohli was unbeaten on eight. India vs New Zealand, ICC WTC Final Day 5 Highlights.

# Rohit Sharma for the second time went past 30-plus runs in both innings of a Test match in SENA countries.

# Ravi Ashwin has now scalped 281 Test wickets under Virat Kohli, the second-most under a captain in Tests.

# Mohammed Shami is the first Indian to take a 4-wkt haul in ICC finals.

India’s response then began on a positive note, but Tim Southee soon accounted for Shubman Gill to leave India at 24 for one. Rohit Sharma and Pujara then took their side forward before Southee picked yet another wicket. He removed Rohit to put New Zealand slightly ahead.

(The above story first appeared on LatestLY on Jun 23, 2021 12:18 AM IST. For more news and updates on politics, world, sports, entertainment and lifestyle, log on to our website latestly.com).