India won the 1988/89 series 2-1, but the contest is usually remembered for the Bangalore Test, where Hadlee broke Botham's world record of most Test wickets. 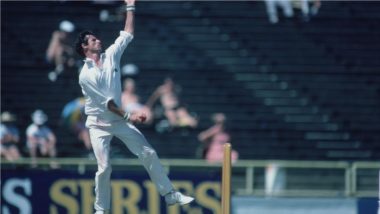 When New Zealand toured India in 1988/89, all focus was on Richard Hadlee. Then on 373 Test wickets, the great man needed one wicket to break Ian Botham’s world record. He got there on the first morning of the series, having Arun Lal caught at slip by Chris Kuggeleijn. Hadlee ended the series with 18 wickets at 14 apiece – incredible numbers for a 37-year-old.

Hadlee took 5-65 in the first innings at Bangalore, but India still managed to declare on 384/9 (Navjot Sidhu 116). Part of that was because half the New Zealand team went down with a stomach bug. Things became so dire that former captain Jeremy Coney had to be summoned from the commentary box and Ken Nicholson from the press box to field as substitutes. India won by 172 runs.

(The above story first appeared on LatestLY on Jun 21, 2021 05:35 PM IST. For more news and updates on politics, world, sports, entertainment and lifestyle, log on to our website latestly.com).