An India-Pakistan clash is not about points and victories but a lot of emotions are involved in these matches. As both these young sides gear up to face each other, let us take a look at some key players from both camps to watch out for in this match. 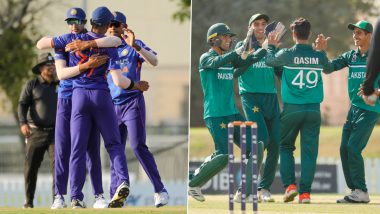 An India vs Pakistan clash in cricket or any sport for that matter is always a highly-anticipated one, no matter which format and fans are all excited to watch the young guns of both these countries face each other in a mouth-watering ACC U19 Asia Cup 2021 clash on Saturday, December 25. Both teams started their respective ACC  U19 Asia Cup 2021 campaigns on a winning note. While Pakistan defeated Afghanistan, India recorded an impressive win over UAE in the tournament. Now, both these sides would be gunning for their second win of this year's competition, which would be crucial as the competition progresses. Pakistan U19 Bundle Out Afghanistan U19 for 52 Runs, Open Their ACC Under-19 Asia Cup 2021 Campaign With Four-Wicket Win

With India U19 and their Pakistan counterparts set to collide in the fifth match of the U19 Asia Cup, let us take a look at some players to watch out for in this game.

1) Harnoor Singh: The young Indian batsman truly made a name for himself as he scored a majestic 120 in the first game against hosts UAE. The right-hander struck a total of 11 fours in his knock which came off 130 balls as he helped India set up a 283-run target. Deservedly, he was named Man of the Match for his efforts.

2) Yash Dhull: The Indian U19 team captain too did well with the bat in hand in the first game, helping his side post a competitive total. The right-hander scored 63 runs off 68 balls and he would be aiming a similar sort of performance against archrivals Pakistan. Harnoor Singh, Yash Dhull Shine as India U19 Beat UAE U19 by 154 Runs in ACC Under-19 Asia Cup 2021

3) Rajvardhan Hangargekar: The impetus to the Indian innings in their first game against UAE was due to this player's explosive knock. He scored 48 runs off just 23 balls with six fours and two maximums as he propelled his side to a challenging total, something which eventually turned out be good enough for them to win. Adding to it, he also snared three wickets for just 24 runs. He would be one of the most important players to watch out for in the Pakistan clash with his all-round skills.

4) Ahmed Khan: Pakistan managed to beat Afghanistan in their first match and one player hugely responsible for restricting the opposition to a very low total was Ahmed Khan. The right-arm quick scalped three wickets while conceding 21 runs in six overs as Afghanistan were shot out for only 52 runs. His ability to pick wickets would be very important for Pakistan in their upcoming match against India.

5) Awais Ali: Awais Ali bowled one of the most economical spells in Pakistan's win over Afghanistan as he took two wickets, conceding just nine runs in seven overs. With him in form, Pakistan would expect another solid performance against India.

These were just five players from both sides who could play important roles in the India U19 vs Pakistan U19 match on Saturday, December 24. Having said that, there are other young stars as well like India's Shaik Rasheed, Nishant Sindhu and Kaushal Tambe amongst others while Pakistan have the likes of Muhammad Shehzad, captain Qasim Akram and Maaz Sadaqat. Some of them, especially the Pakistan batters, did not do well against Afghanistan but they would aim to get back up and try and impress everyone by putting on a good show. These players too would be key in this game against India.

(The above story first appeared on LatestLY on Dec 24, 2021 05:58 PM IST. For more news and updates on politics, world, sports, entertainment and lifestyle, log on to our website latestly.com).