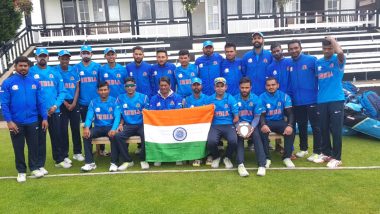 From England, opener Angus Brown scored 44 but his innings could not take England to victory. Callum Flynn as the second-highest scorer from English team with 28 runs. There were three run-outs during the England batting. Indian bowlers Sunny Goyat and Kunal Phanase took two wickets each. Narendra Mangore and Anish Rajan registered one wicket each.

Physical Disability World Series 2019 is being held in England and the cricket tournament is an initiative of England and Wales cricket board. Six teams participated in the tournament which are India, Pakistan, Afghanistan, England, Bangladesh and Zimbabwe.

(The above story first appeared on LatestLY on Aug 14, 2019 09:05 AM IST. For more news and updates on politics, world, sports, entertainment and lifestyle, log on to our website latestly.com).